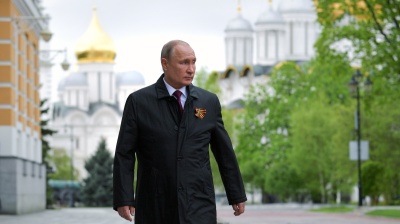 Victory Day is celebrated on May 9 in Russia, the day after most other European countries. / Image: bne IntelliNews.
By Theo Normanton May 9, 2022

In public speeches to mark the anniversary of Allied victory over Nazi Germany, Ukrainian President Volodymyr Zelenskiy and Russian President Vladimir Putin both attempted to draw parallels between the war in Ukraine and World War II.

“On the Day of Victory over Nazism, we are fighting for a new victory… We have been through different wars. But they all had the same outcome,” Zelenskiy said.

Meanwhile, Putin insisted that Russian troops participating in the invasion of Ukraine were “fighting on their own land”, just like Soviet troops in WWII.

That was where the similarities ended, however. The two leaders painted very different pictures of the war in Ukraine and its underlying causes.

In a pre-recorded speech to the Ukrainian people, Zelenskiy walked through the streets of Kyiv, skirting tank traps and sandbags. He told his viewers that Ukraine was defined by its free spirit, and that the Russian soldiers are bound to fail in their mission of subjugating a free nation.

At the same time, Zelenskiy insisted that Ukraine did not want war. He said that “only a madman” would want a repeat of the destruction wrought upon Europe in the 1940s, but hinted that the war crimes allegedly committed by Russian soldiers evoked the atrocities perpetuated by Hitler’s regime.

Putin’s speech was a much more formal affair. Flanked by heavily decorated generals, he addressed a Red Square packed with platoons of soldiers from across Russia. “You are fighting for the security of your motherland,” he told them, claiming that some of those present had come directly from the Donbas offensive.

Attempting to justify his decision to invade Ukraine, Putin referred repeatedly to Nato activity in Ukraine, implying that this posed a threat to Russian security. “This was a provoked and timely response – the only correct decision,” he said of the invasion. He also repeated claims that Ukraine could be actively trying to acquire nuclear weapons, but provided no evidence for the allegations.

Russia and Ukraine did not mark Victory Day on the same date. Ukraine commemorated the end of WWII on May 8 like most other European countries, whereas Russia marked the occasion on May 9 due to the fact that Nazi Germany’s surrender took place after midnight by Moscow time.

In many ways, this difference between the two nations’ approaches to Victory Day served to underscore the thrust of President Zelenskiy’s argument: Russia and Ukraine are fundamentally different. It is precisely this difference, according to the Ukrainian narrative, which provoked Russia’s invasion.

“They believe that their missiles can destroy our philosophy. It annoys them. It is unfamiliar to them. It scares them. Its essence is that we are free people who have their own path,” Zelenskiy said.

Zelensky also stressed that it was important to commemorate Victory Day as usual this year to disprove the Russian argument that Nazism is rife in Ukraine.

“We are proud of our ancestors who, together with other nations in the anti-Hitler coalition, defeated Nazism. And we will not allow anyone to annex this victory, we will not allow it to be appropriated,” said Zelenskiy.

More than 8mn Ukrainians died in WWII, according to the Ukrainian government.

“Our enemy dreamed that we would refuse to celebrate May 9 and the victory over Nazism. So that the word ‘denazification’ could be justified.”

In fact, Zelenskiy suggested, it is the Russian government which is not mindful of history. Just like the German soldiers in WWII, he said, the Russian troops are fighting on behalf of their chief, while the Ukrainians are fighting only for themselves and their homeland. In this sense, Zelenskiy said, “the victory of our ancestors was not in vain. They fought for freedom for us and won.”

“And very soon there will be two Victory Days in Ukraine. While they will not have even one left to celebrate.”

Putin’s speech described the invasion of Ukraine as a “pre-emptive strike” to defend Russia against an imminent invasion. He did not offer evidence for the claims that an attack on Russia was being planned by Ukrainian forces, which are vastly outmatched by the Russian side in numbers and resources. UK Defence Secretary Ben Wallace said that Putin’s suggestions were “fairytale claims”, while Kyiv said that the war was actually a result of “Russia’s sick imperial ambitions”.

In spite of widespread speculation that Putin could declare a general mobilisation or officially recognise the conflict in Ukraine as a war, his Victory Day speech gave no sign of a change in the Kremlin’s strategy.

Sky-high inflation forces more Russians to take out “pay-day” loans
1 day ago
Death of China-to-Russia cargo transit routes means it’s all aboard for Kazakhstan
1 day ago
Armenia diaspora faces waning influence on Turkey, Azerbaijan negotiations
3 days ago
Gas crisis: Can Europe store enough gas this summer to get through the winter?
3 days ago
African gas pipeline projects revived due to European gas crisis
3 days ago