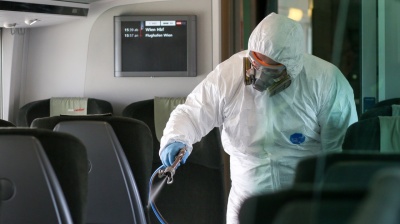 Hungary-based producer of anti-bacterial coatings Resysten was expanding steadily before the coronavirus (COVID-19) pandemic caused demand for its product to explode.

The pandemic this year brought an immediate hike in demand for Resysten’s product — along with demand for personal protective equipment (PPE), facemasks, hand sanitisers and anything people could use to protect themselves and others against infection. This saw factories being converted to roll out hygiene products, while companies already in the sector scrambled to up production to meet soaring demand.

CEO Shajjad Rizvi tells bne IntelliNews that even once a vaccine for COVID-19 is found, given the raised awareness about the threat of infection Resysten still expects hospitals, public transport operators and businesses to use the product to guard themselves against future viral outbreaks.

Resysten’s photocatalytic coating system is based on titanium dioxide, whose anti-bacterial and microbial benefits were discovered by a Japanese professor back in the 1970s. More recently, a collective study by multiple universities discovered that it could be used to protect surfaces; the process was based on a photocatalytic reaction that produced free radicals, killing anything on a surface.

Resysten was founded to commercialise this discovery, and further work was carried out to develop a product that lasts longer – the company guarantees its coatings for a year — and in very low lighting conditions. It works on all surfaces, including glass, ceramics, metals and textiles, and tests have shown its kill rate is as good as any standardised disinfectant, says Rizvi in an interview over Zoom.

The company’s initial clients were in public transportation – it coated 27km of escalator rails in the Budapest metro, for example – as operators wanted to protect travellers from a flu epidemic. From there, Resysten moved into working with food processing companies to protect against infections, in particular e-coli.

At the same time, Resysten was going through the lengthy process to have its product approved for use in hospitals in Hungary. Just three years after the company was founded, surfaces in every regional major hospital in Hungary had been coated.

The area coated by Resysten rose steadily year by year from 5,000 square metres initially to around 30,000 sqm pre-pandemic, with the company typically coating areas touched by multiple people such as door handles, stair and escalator rails and counters. In the commercial sector it has coated 6,500 shopping trolleys for Metro Cash & Carry and the counters in mobile phone operator Telekom’s shops, as well as working with car manufacturer Audi.

“When COVID happened, we already had a reputation in Hungary and started getting calls from gyms, offices, retailers…” says Rizvi. This year, the company expects to coat around 130,000 sqm of surfaces in Hungary alone.

Resysten is also exploring international expansion, a long process that involves securing regulatory approvals in each country and finding local partners. In addition to its headquarters in Torokbalint, Hungary, the company is setting up a second office in London to work with countries outside the EU.

Since the onset of the pandemic, Resysten has been “getting calls from all over the world,” says Rizvi. He points out that with the COVID-inspired demand and its references, including from the Hungarian operations of international blue chips, Resysten expects to have a slew of international clients as soon as it gets approval from regulators.

“Because of COVID everything’s gone bonkers, we’ve seen a sixfold increase in demand. We all pray there’s going to be a vaccine, but we really do have a future post-vaccine in ensuring germs don’t have the opportunity to spread so freely … COVID-19 accelerated interest and demand, but we had a very good life before COVID, and post-COVID surface protection will be part of the future for the fight against the next virus or bacteria outbreak."

Antibacterial coatings are not new, and Reysten has a number of rivals. What sets the company’s product apart, says Rizvi, is the length of time it’s effective for and the fact that it guarantees this. “There’s a lot of snake oil out there, but there are also some serious players,” he comments.

To ensure the coating is effective, the application is as important as the fluid. Applying too little or too much causes it to lose effect. Resysten has its own team applying the coating for its customers and will work with trained partners as it expands to other countries.

COVID “swamped us”, says Rizvi, but the company is still looking at new applications for its products. Pre-pandemic, it was already looking at putting the coating on plastic gloves and face masks, and had been approached by one of world’s largest appliance manufacturers.

An opportunity pursued by most companies in the field is how to use the product to “empower housewives or the average Joe”. But, points out Rizvi, reiterating that the company’s coatings need to be applied by trained specialists, “We don’t want to fall into the trap other companies have fallen into of just putting out a spray bottle for the mass market because it simply doesn’t work.”

And while Resysten develops its product, Rizvi says there is a lot still to discover about titanium dioxide: “We are really at the beginning of this element. It’s exciting to be there.”

Hungary's domestic tourists save the day for embattled sector
Hungary's budget on track for record shortfall
COMMENT: How Covid-19 is changing international business and politics

Russia to vote in 83 regional elections

Russia goes to the polls this weekend for important regional elections in 83 regions where the Kremlin will face a challenge due to the sinking popularity of the ruling United Russia Party.