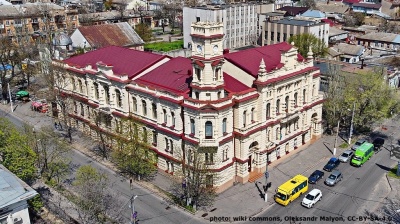 50,000 civilians were ordered to evacuate from Kherson and martial law was declared in all four of the four regions annexed by Russia in September. / bne IntelliNews
By bne IntelliNews October 19, 2022

Russian authorities ordered the evacuation of 50,000 from the southern Ukrainian town of Kherson occupied by Russians, as fighting around the city intensifies on October 19.

On the same day Russian President Vladimir Putin declared martial law in four Ukrainian regions that Moscow annexed in faux referenda at the end of September, adding to the expectations of a Russian counter-offensive to push back advancing Ukrainian troops.

"I signed a decree to introduce martial law in these four subjects of the Russian Federation," Putin said during a televised meeting of Russia’s Security Council, referring to Ukraine's Donetsk, Luhansk, Zaporizhzhia and Kherson regions. Martial law will be imposed from October 20 and gives authorities sweeping powers to impose curfews, travel and residence restrictions, military censorship and more.

The orders come a day after the new leader of Russia’s forces in Ukraine Sergei Surovikin said in an interview that the Russian army is preparing for “difficult decisions” in a battle for control of the city.

His comments were taken to suggest variously that Russia was preparing to launch its own counter-offensive against Ukraine’s troops in the region, to use a tactical nuclear weapon in the region or to withdraw from the city altogether.

Kherson has been centre of attention for months and the focal point of Ukraine’s highly successful counter-offensive. Initially seen as target for the Ukrainian assault, the Kremlin was caught off guard when Kyiv launched the bulk of its forces against Russian troops in Kharkiv region in the east, quickly liberating hundreds of towns and villages in the region.

However, military campaign to regain control of Kherson, the only town on the western bank of the river Dnipro under Russia’s control, has continued at a slower pace.

Surovikin was appointed to the newly created position of commander of Russia’s "special operation" ten days ago. Previously there was no named overall commander of Russian forces. He made his public debut in a long interview on the Rossiya 24 TV channel in the evening of October 18.

"The situation in the area of the special military operation can be described as tense. The enemy is not abandoning its attempts to attack Russian troop positions," he told Rossiya 24.

While commentators' reactions to the interview were mixed, Russian state media presented the comments as preparation for the abandonment of Kherson, which has become hard to supply after Ukraine knocked out the three bridges that connect the city to Russian-controlled territories in the eastern part of Ukraine. Kherson pro-Russian authorities announced the evacuation of the civilian population last week, but then the departure was voluntary.

Deputy governor Kirill Stremousov said at the time: "The battle for Kherson will begin in the near future," and recommended that the civilian population "if possible, leave the area of ​​the forthcoming fierce hostilities."

"We are expecting to evacuate between 50,000 and 60,000 people to the left bank of the Dnipro," pro-Kremlin official Vladimir Saldo said on the Telegram channel Solovyov Live, reports the Moscow Times. Saldo said he expected the evacuation to take six days and RIA Novosti news agency reported that evacuations by boat had already begun.

RIA Novosti reported that local residents had received text messages urging them to evacuate "before the Ukrainian army begins bombing."

"Russians are trying to scare the people of Kherson with fake messages about the shelling of the city by our army and are also staging a propaganda show with evacuation," the Ukrainian president's chief of staff, Andriy Yermak, wrote on Telegram.

Surovikin said during his interview that the Russian army "will above all ensure the safe evacuation of the population."

Pro-Kremlin officials were amongst the first to be evacuated from Kherson, leaving on buses for the east bank of the Dnipro.

Tens of thousands of civilians trapped in other cities like Mariupol had been killed during clashes between the two armies earlier in the war.

Bankova said after its counter-offensive started in September that it still intends to re-take Kherson and this week Ukrainian officials said they hope to have recaptured it before the New Year and that the entire campaign could be over by next summer.

The city is heavily defended by Russia, which moved some 20 battalion tactical groups (BTGs) to defend the city in the run-up to the launch of Ukraine’s counter-offensive.

Elsewhere, rockets continue to rain down on Ukrainian cities, targeting electricity infrastructure. They have already damaged or destroyed substations and reduced power supplies in the country by an estimated 30%.

Kyiv Mayor Vitali Klitschko said the same day that "several Russian rockets" had been downed over the capital after AFP reporters heard several loud explosions in the centre of the city.

However, the Ukrainian advance in the east has slowed as the Russian conscripts that form the recent partial mobilisation that started on September 21 arrive at the front line. According to the UK Defence Ministry, Russian forces have even made some advances, retaking ground lost, but are moving “very slowly”.

The escalating fighting and Russia’s abrupt reversal of fortunes in recent weeks has led to renewed speculation that Putin may order the use of tactical nuclear weapons in Ukraine. However, the Pentagon admitted that there are no signs of Russia preparing to use nuclear weapons “for the moment,” Pentagon spokesman Brigade General Patrick Ryder said during a briefing a day earlier.

Asked if the US was prepared to respond if a nuclear weapon is used, the spokesman said: "We are completely ready. We continue to monitor the situation very closely. In the meantime, we have not seen anything that would indicate that Russia has made a decision to employ nuclear weapons. Others [officials] have communicated that there would be consequences."