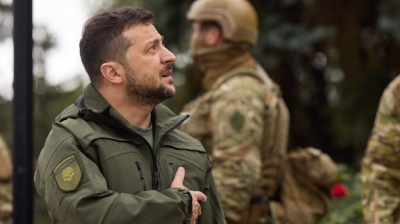 Zelenskiy has hotly insisted that the missile that struck a Polish farm killing two was Russian, not Ukrainian, despite Western confirmation it came from Ukraine. / bne IntelliNews
By Benn Aris in Berlin November 17, 2022

Ukrainian President Volodymyr Zelenskiy refused to accept Nato and US claims that the missile that hit a Polish village on November 15 killing two was Ukrainian as fears of waning Western support mount.

“I have no doubt that it was not our missile or our missile strike,” Zelenskiy told Ukrainian news outlets on November 16, adding: “I want us to be fair, and if it was the use of our air defence, then I want that evidence.”

US President Joe Biden said earlier the same day that it was “unlikely that [the missile] was fired from Russia, but we’ll see.”

Biden’s comments were echoed by Nato Secretary-General Jens Stoltenberg, who also confirmed that the missile was very likely a Ukrainian S-300 fired at incoming Russian missiles that went off course.

"Our preliminary analysis suggests that the incident was likely caused by a Ukrainian air defence missile fired to defend Ukrainian territory against Russian cruise missile attacks. But let me be clear: this is not Ukraine’s fault," Stoltenberg said at a press conference.

Polish President Andrzej Duda said on the same day that the strike “appeared to be accidental” and said it was “highly probable” that it was the result of a Ukrainian air defence missile. He went on to say: “However, Ukraine is in no way to blame. Russia must take the ultimate responsibility for this tragedy.”

Russia fired a barrage of 100 missiles at Ukrainian power plants during the night of November 15 in an attempt to plunge the country into darkness just as winter arrives.

Kyiv is under increasing pressure after the US admitted that Ukraine fatigue is building amongst the Western allies as the war drags into its ninth month, fuelling an expanding polycrisis that has seen the cost of living, inflation and energy prices explode.

“Ukraine fatigue is a real thing for some of our partners,” one US official told the Washington Post earlier this month.

In the last few weeks, the West has reversed its hard line on Russia and suggested to Kyiv that it should start preparing itself for talks with Russia. Specifically, the US said earlier this month that Zelenskiy should drop his refusal to deal with Russian President Vladimir Putin directly. In October Ukraine passed a law banning Zelenskiy from negotiating with Putin, saying it would “wait for a new president.” However, following the US suggestion that Zelenskiy soften his line, the Ukraine president repeated his demands for the start of peace talks, but pointedly dropped any mention of refusing to talk to Putin.

Thanks to Western support Ukraine has managed to recapture significant amounts of territory, including clearing most of the Kharkiv region of Russian troops and the liberation of the key southern city of Kherson on November 10. While Ukraine celebrated the return of Kherson to Kyiv’s control the offensive in the Donbas region has stalled and Russia is reportedly digging in both Donbas and on the left bank of the Dnipro river in preparation for a long winter campaign.

Ukraine's military are highly motivated and increasingly well equipped. During this week’s barrage the air defence reportedly shot down more than 70% of the inbound missiles, but the army still lacks the weapons needed for an effective assault to expel Russia’s forces from its territory completely.

Zelenskiy has been frustrated from the start with Nato’s half-hearted commitment, calling since the start of the war for more powerful weapons including tanks and planes. The West has been quick to supply Ukraine with powerful defensive weapons, but reluctant to provide offensive materiel, with Germany a notable example.

Bankova has kept up a constant media campaign to keep the Ukrainian struggle in the media spotlight as part of its efforts to persuade the West to do more, including inviting Vogue to Kyiv to do a cover feature on the first lady Olena Zelenska in July.

Zelenskiy, a former media professional and owner of a comedic production house, has proved himself to be extreme media savvy and has rallied the Ukrainian population behind the flag with his inspiring nightly video addresses. He has also conquered the information war with Russia in the international press, but he has been criticised for not admitting a mistake in the Polish missile incident, which was a PR blackeye for Bankova.

Having lost control of the media message, Zelenskiy's decision to deny the S-300 that hit the Polish farm is widely seen as a mistake.

“This denial is surprising,” Samantha de Bendern, associate fellow of Chatham House covering Russia, told France24 in an interview. “We have come to expect a much more sophisticated media response from the president… He needed to admit the mistake and apologise.”

Despite the growing desire amongst some members of the Western alliance to see an end to the war, peace talks are unlikely to start soon. Ukraine public opinion is solidly behind Zelenskiy and to continue fighting to expel Russia whatever the cost. The recent successes in Kharkiv and Kherson have only bolstered that sentiment. At the same time, the international public support to continue to support Ukraine also remains overwhelming, even if that support has started to slip somewhat in recent polls. It seems highly likely that the war will continue throughout the coming winter and a chance for peace talks to start will only be possible after months of stalemate on the battlefield, which is yet to happen.

The Western position is that Kyiv has control of pulling the trigger on peace talks and there will be “no decision on Ukraine without Ukraine,” Stoltenberg said at a press conference the same day.

However, with Ukraine’s economy in tatters and almost all of its military industrial complex quickly destroyed by Russia in the early days of the war, Kyiv remains entirely dependent on Nato members for weapons and ammunition. Should the West slow supplies then Bankova would have little choice but to start talks with Moscow on freezing the conflict. For its part, the Kremlin has also been signalling it is open to talks as it also runs out of ammunition and is facing a deep and multiyear recession as a result of the extreme sanctions imposed by the West.