Why Turkey is going nowhere fast with ‘lira-isation’ 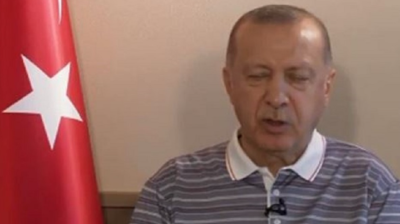 Lira-isation is making for tough going. President Erdogan falls into a micro-sleep while delivering an Eid greeting in July. / Screengrab.
By bne IntelIiNews October 25, 2022

Turkey is getting nowhere fast with its “lira-isation” despite introducing more extreme de-dollarisation policies in recent months.

That’s the conclusion of Liam Peach, an emerging markets economist at Capital Economics, who took a look at how Turkish policymakers have doubled down on what they present as their new economic model.

Turkey, it is widely acknowledged, is in one heck of an economic tangle following years of unconventional ‘Erdoganomics’ pursued under Turkish leader of two decades Recep Tayyip Erdogan. Official inflation is running at 83%, versus a benchmark interest rate that was last week cut by 150 bp to 10.5%, while the Turkish lira (TRY) has shed 29% against the USD this year, having lost 44% last year.

Peach acknowledged that the more extreme de-dollarisation policies (with “new measures now being announced almost every other week”—see table at foot of article) appear to have had some impact in terms of stemming lira depreciation, but observed that “the central bank seems to have misdiagnosed dollarisation as the cause rather than the symptom of Turkey’s inflation problem. It’s hard to see the central bank reducing inflation sustainably in the coming years while real interest rates remain deeply negative”.De-dollarisation, noted Peach, “is a multi-year process and the early signs suggest that [in Turkey] it is happening slowly”.

“This is relatively large,” said Peach, “but the FX share of private sector bank deposits (55% in August) was only slightly lower than a year ago and the FX share of banks’ total assets (48% in August) was higher. CBRT [Central Bank of Republic of Turkey] Governor [Sahap] Kavcioglu admitted in July that ‘no one is converting their FX’.

Unable to raise interest rates—given the adherence to Erdoganomics—policymakers have embarked on what Peach refers to as “an unorthodox experiment called the ‘new economic model’” that concentrates on external rebalancing (reducing the current account deficit) and the “lira-isation” (promoting use of the lira) to lower macro vulnerabilities and inflation permanently.

As part of their framework, policymakers are focused on expanding the use of lira in transactions, contracts, deposits and loans, increasing the use of lira-denominated assets in collateral, reducing FX-indexation and promoting lending for investment purposes and to exporters rather than to consumers. These measures are expected to reduce FX demand and narrow the current account deficit sustainably.

In April, policymakers forced exporters to sell 40% of their FX revenues to the CBRT in exchange for lira (up from 25% in January).

On top of this, said Peach, banks are forced to hold more bonds if they lend at higher interest rates, lending to corporates is prioritised over consumers and the banking regulator has capped the maturity of consumer loans.

Said Peach: “There are a lot of moving parts but the key point is that these policies are (i) trying to improve current account dynamics by discouraging banks from lending unless loans are used to boost supply (rather than demand) in the economy and (ii) trying to force increased adoption of the lira in deposits and loans and increase holdings of lira-denominated assets among households, firms and banks.”

The policies are having some impact, with a similar effect to capital controls and are likely to have been partly responsible for limiting the pace of lira depreciation this year, Peach said. Bank lending in foreign currency was now contracting by 20% y/y (in nominal terms), while lira-denominated lending was growing by 70% y/y, he added. Corporate credit growth was outpacing consumer credit by a ratio of 2:1, the largest in four years, Peach also noted, adding that “10-year local currency government bond yields have collapsed from 24% to 12% as banks have responded to the regulations by purchasing bonds.”

Peach cautioned: “There will become a point at which banks become less willing to increase their bond holdings. As we understand it banks will need to reduce the rate of interest on their loans (to comply with the CBRT’s macroprudential measures) or cut lending. We suspect a mix of the two. Interest rates on commercial loans have fallen in recent weeks but anecdotal evidence suggests that credit conditions have tightened as some firms are finding it more difficult to access credit and banks are becoming more cautious about lending. We think a sharp slowdown in credit growth is likely to become clearer from Q4.”

Ultimately, efforts to de-dollarise through force are unlikely to be as effective as policies that naturally make it more attractive to hold lira, advised Peach. “It will be incredibly difficult,” he concluded, “to lower inflation sustainably while the CBRT maintains deeply negative real interest rates. The experience in EMs that have successfully reduced inflation in recent decades is that it could take 5-10 years and requires a combination of improved central bank credibility and tight fiscal and monetary policy (including high real interest rates).

“And on top of this, these “lira-isation” policies present macroeconomic risks. We’ve warned that policies that force firms to reduce their FX assets risks reducing their natural hedge and ability to service their FX debts in the event of further large falls in the lira. More restrictive lira-isation policies could force companies or individuals to withdraw FX from the financial system or transfer assets abroad.”

In a final note, Peach warned: “The lira deposit protection scheme puts the government on the hook for a large bill in the event of lira weakness – the more the lira depreciates and the more interest rates fall, the greater the cost (the government has not put a number on the fiscal cost). And forcing banks to hold more bonds has the look and feel of financial repression by making it easier for the government to finance itself (possibly ahead of a pre-election splurge [with elections due by June at the latest]). This comes at the cost of crowding out credit to the private sector and a misallocation of resources.”

ING: Europe faces stiff competition for natural gas
20 hours ago
PANNIER: Might Tokayev be the real deal?
5 days ago
OPINION: Bosnia economic salvage supplants breakup mood
10 days ago
ASH: Turkey is heading to “incumbent democracy”
10 days ago
RIMMER: You only sing when you’re winning
11 days ago