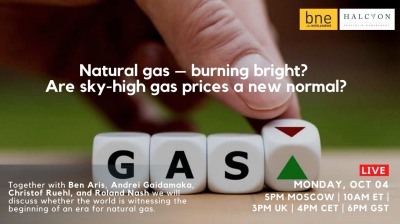 Natural gas prices are at historical highs and breaking records on a nearly daily basis. Are sky-high prices here to stay? What is driving the surge?

bne IntelliNews hosted three veterans of the Russian market to discuss the issues that between them have more than 100 years of experience or working on Russian energy and take a deep dive into the economics of the gas crisis.

Listen to a podcast version here.

Currently at the Centre on Global Energy Policy at Columbia University, and Senior Fellow, M-RCBG, Harvard Kennedy School. Previously, Christof was Chief Economist at the IMF Russia and then Chief Economists at BP from 2005 to 2014 and Global Head of Research at ADIA between 2014 and 2018.

Christof and Andrei are two of the world's leading energy experts, and have been working in the sector for most of the last three decades.

The panel will be co-moderated by Roland, who is a Partner and Chief Investment Strategist of VR Capital. Roland has 25 years’ experience in the Russian and FSU markets. Roland helped build Renaissance Capital, one of Russia’s leading investment banks. Between 2003-2010 he was a Chief Equity Strategist there, from 2006 till 2010 sat on the Executive Committee at Renaissance Capital, and from 2008 to 2010, he was also Co-Head of the Equity Product Group. Roland was voted the number one strategist for Russia in every All-Russia Institutional Investor survey.

The other co-moderator, Ben is the founder and editor-in-chief of business new europe (bne), the leading English-language publication covering business, economics, finance and politics of the 30 countries of the former Soviet Union, Central and Southeastern Europe and Eurasia. Ben has been covering Russia since 1993 and is a former Daily telegraph Moscow bureau chief for the end of the Yeltsin era and start of the Putin era. He set up in 2006, which is now the only independent publication in English covering the region and market leader.