Uzbekistan to return to the heart of regional trading networks 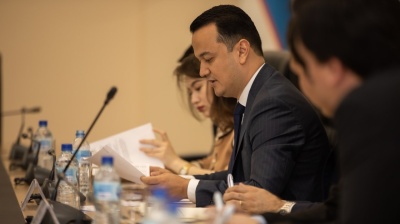 As a nation with a long history of being at the centre of the ancient world’s trading networks, Uzbekistan’s policies that restricted trade and investment in recent decades did not sit easily. Now things are changing and the country has already seen a hike in both international trade and foreign direct investment (FDI) in the last few years, as reforms take hold. Deputy Minister for Investment and Foreign Trade Laziz Kudratov outlined the next steps, in an interview with bne IntelliNews.

Following a series of reforms in the last three years, according to government figures reported by Kudratov, FDI has grown from $1.9bn in 2015 to an anticipated $7bn this year — he stresses this is based on funds injected into the economy not mere project announcements. But there is much more still to do, as the authorities are aiming to further boost FDI to as much as $10.3bn by 2022.

The hike in investments was facilitated by a series of steps taken by the government, specifically the lifting of restrictions to restore currency convertibility, allowing the repatriation of profits and ongoing reforms to the tax system.

Not only has the volume increased, but the structure of FDI into the country has also changed. “Three to four years ago around 70% of all FDI was targeting oil and gas. Now this has changed dramatically and today around half of total investments are into sectors not related to oil and gas. We see more balanced consumption of FDI in different sectors of our economy,” Kudratov says.

Among the deals in sectors that have not traditionally been the main focus of investors into the Central Asian countries are a franchise agreement to bring supermarket chain Carrefour into Uzbekistan, and a series of projects announced in the solar power sector.

This is part of a pattern of diversifying away from reliance on raw materials such as gold, oil and copper, and investment into deep progressing with greater added value that enables exports of ready made goods rather than raw materials. A prime example of this was the Ustyurt Gas Chemical Complex that opened in 2016 (before the recent changes), and is to be followed by a new petrochemical plant based on MTO (methanol-to-olefins) technology, announced in May.

Talking of what has to be done next, Kudratov stresses the need to complete reforms of the taxation system. “Our target is to make the most attractive tax system in the region to be able to attract more foreign businesses here,” he says. But the changes won’t continue indefinitely. As soon as the reforms have been put in place, it will be “time to make a more stable environment so companies can feel comfortable.” There are also plans for a wide-reaching privatisation programme and a comprehensive overhaul of the capital market.

On top of this, Kudratov believes the government should work harder to reform the banking and financial sector: “Banks should operate and work only on market based principles,” he stresses. Officials are already working with international financial institutions (IFIs) to reshape the banking system, and the widespread use of directed lending is being addressed. Privatisation of some of the government-led banks will be an important part of this, and — evidence of the impact reforms already made have had — international banks started to enter the market.

On top of the internal reforms, over the last three years, the Uzbek authorities have repaired previously tense relations with neighbours in particular Kyrgyzstan, and have become increasingly open to regional projects.

There are also plans to open up Uzbekistan to trade with the rest of the world. Entering the World Trade Organisation (WTO) is, Kudratov says, “the utmost priority for us”; a deputy minister has been appointed with an exclusive mandate to work on Uzbekistan’s WTO accession. Work is progressing; Uzbekistan submitted a memo on accession to the WTO two months ago, and has now started negotiations with other members.

“We believe that in a couple of years Uzbekistan will be able to join, which will allow us to be more competitive not only in trade but also in investment,” says Kudratov.

Unsurprisingly this has unnerved managers of some domestic companies that are not used to being exposed to international competition. However, Kudratov argues, “we understand without being truly competitive on the international level, we will not be able to develop strong competitive industries.”

The question of whether Uzbekistan will join the Russian led Eurasian Economic Union (EEU) that already counts its neighbours Kazakhstan and Kyrgyzstan as members, has also been raised with a Russian official claiming recently that Tashkent has decided to join. However, Kudratov says a decision will only be made following analysis of the pros and cons, and “based on the interest of Uzbekistan and its people”.

“The EEU is not only about trade, all other commitments and that’s why we are working on export level first to evaluate what benefits Uzbekistan can get out of it, what are the weak spots and what can hurt the Uzbek economy if we do it,” he said. Only after the analysis is complete will Uzbekistan make a decision on accession.

Another area in need of attention is physical infrastructure, especially in the transport sector; speeding up access to international markets is a particular challenge for Uzbekistan as one of only two double landlocked countries in the world.

“We are in the middle of Central Asia, bordering four Central Asian countries. Our policy is also to expand our trade, trade with European countries, with the US… In order to achieve those goals we should develop very efficient, cost effective transport resources. From this point of view Uzbekistan supports all the regional initiatives to develop transport corridors and to develop new routes, new railways, new roads, to enable us to be more efficient on external markets,” Kudratov said.

According to the deputy minister, currently the authorities in Tashkent are discussing construction of a railway from China to Uzbekistan via Kyrgyzstan with officials in Kyrgyzstan and China. While the line has been discussed on and off for more than 10 years, “Finally there is a commitment and a desire of our Kyrgyz neighbours to start practical implementation of this project,” says Kudratov. Not only will it be a direct connection within Central Asia, it will also open up a new east-west transit route to Europe that will be shorter than the route across Russia.

As a country in China’s near neighbourhood, Uzbekistan has looked to benefit from the international Belt and Road Initiative (BRI) launched by Beijing to build infrastructure links across and around the Eurasian landmass. However, Tashkent is also interested in the potential of north-south transport routes, and also under discussion is the connection of the South Asian and Central Asian railway systems. “If we manage to do this, will have single Eurasia railway network which will allow goods from Asia to be delivered to Europe two times faster than via the existing sea route,” says Kudratov.

A connection from Uzbekistan to Mazar e Sharif in Afghanistan has already been completed, so all that remains to be built is the 580km between Mazar e Sharif and Peshawar in Pakistan, though Kudratov admits, there are “many obstacles — political, security issues, that we have to solve” before the line can be built.

“We are assisting our Afghani neighbours to develop their economy and infrastructure. It’s in the interest of Central Asia to have a safe Afghanistan and when have this we hope to be able to develop that project.” And this is part of a wider ambition to restore Uzbekistan and the rest of the region to its historic status as in the transit of goods between Europe and Asia. Once physical infrastructure such as this is in place, Kudratov says, the “revitalised role of Central Asia as it was in Silk Road times will begin.”