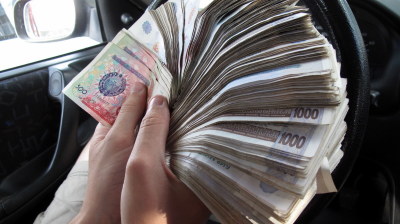 Economic reforms in Uzbekistan have included the lifting of strict currency controls. Pictured is a bundle of som (a $100's worth as things stood in 2009).
By bne IntelliNews February 14, 2019

Uzbekistan’s $1bn sovereign bond debut has proved a smash hit with some initial reports indicating the demand was there for as much as $8.5bn, making the issue 8.5-times oversubscribed.

The debut had generated an air of optimism among investors who attended Uzbekistan’s New York, Boston and London roadshows. The issuance is set to pave way for regular debt sales.

Many comparisons have been made between Uzbekistan’s debut and neighbouring Tajikistan’s $500mn first eurobond foray in 2017—the main difference appears to be that Tajikistan needed the funding for the construction of its Rogun hydropower dam mega project, while Uzbekistan is merely looking to set a benchmark. At the same time, Uzbekistan has managed to grab plenty of attention with its ongoing reforms aimed at opening up its economy, with moves including the lifting of strict currency controls. Tajikistan did not enjoy such publicity leading up to its eurobond.

“The feverish demand automatically reminds me of Tajikistan’s debut,” Roman Bernatskiy, head trader of FFF Asset Management in Cyprus. “There could be a case of deja-vu, with trading in the first days at 101 percent of face value and higher, followed by the subsequent acknowledgement that it’s expensive and a drop well below face value.”

The Tajik bonds, due in September 2027, are rated three levels below Uzbekistan at S&P. The return on Tajik bonds has stood at 0.3% since their sale, whereas emerging markets in the period have shown an average loss of 0.4%. At the same time, ex-Soviet Georgia’s bonds, which happen to share Uzbekistan’s rating, returned 2.9% in the period.

Very limited data
Investors are known to still have significant concerns about how secretive Uzbekistan is when it comes to its economy. Very limited data on the country’s key mineral sector is available, for instance. While fund managers say Tashkent will be expected to pay a premium for that secrecy, Uzbekistan has been attempting to improve its transparency.

Aside from issuing better statistical reports on macroeconomic indicators, Uzbekistan issued a decree in January stating that it would no longer shroud in secrecy statistics on its main export commodity, gold. Gold is unofficially estimated to make up approximately 20% of the Central Asian nation’s exports. However, figures from international trade data visualisation engine, The Observatory of Economic Complexity (OEC), indicate that gold made up 40% of Uzbekistan’s exports in 2016 in monetary terms. Its value amounted to $2.86bn.

JPMorgan, Citi and Gazprombank are handling Uzbekistan’s Eurobond transaction. Uzbekistan has appointed HSBC banker Odilbek Isakov as the head of its Sovereign and Corporate Debt Division.