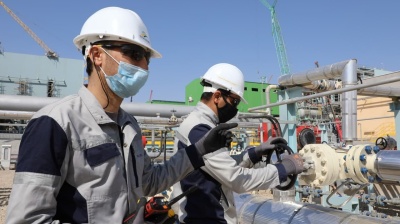 Uzbekistan has a fast growing and increasingly affluent population, which means energy demand is already increasing and will grow further in the coming years. Together with Tashkent’s participation in the global effort to fight climate change, this has prompted the government to draw up plans to overhaul existing infrastructure, raise efficiency and encourage investment into renewables.

“Development of the energy sector is essential for economic growth,” Deputy Energy Minister Bekhzot Narmatov said in an interview with bne IntelliNews in Tashkent, in which he outlined the plans for energy sector liberalisation, infrastructure investments and boosting efficiency.

The government’s forecast, as set out in its power sector development concept for 2020 to 2030 is for the current demand of around 68bn kWh to increase to between 110bn and 115bn by the end of the decade. “This increase is because of two factors: the population is growing and will increase from 34mn today to close to 38mn by 2030, and consumption per capita, which is currently below the global average, is also expected to increase,” Bakhrom Umarbekov, project manager on renewables at the energy ministry, told bne IntelliNews in a separate interview.

Tashkent aims to establish an “open, liberal and investor friendly energy market” as the government tries to “move away from government regulation in every part of the economy,” said Narmatov. “We believe liberalisation will bring the benefits of ensuring supply of energy resources, increasing competition and encouraging private investment into infrastructure, thus decreasing carbon emissions because inefficient systems, especially in gas supplies, cause huge amounts of methane to be released into the air.”

To enable this to happen, the government is first investing into backbone infrastructure for both electricity and gas because, as Narmatov put it, “when you don’t have the road, you can’t drive the bus”.

On June 15, the energy ministry outlined its plans to create a wholesale electricity market by 2025, which again is intended to improve management and reduce state ownership.

Uzbekistan has potential for renewable energy investment especially, given its sunny climate, for solar power, but also for wind and hydro energy. “The government’s strategy is to diversify power sources and increase power output by bringing in solar PV and wind, and replacing old gas turbines that have low efficiency,” said Umarbekov.

On August 10, the energy ministry announced plans to increase its 2030 renewables targets. The original concept note on ensuring electricity supply in Uzbekistan for 2020-2030, published in last year, set out plans to develop power capacity by rebuilding existing power plants, inviting private power developers to take part in power sector development and deepening reforms in the energy sector. It also said that PV and wind power will account for a significant share of generation capacity.

“Despite the COVID-related economic slowdown of 2020, the demand for power continued to grow and the ministry has decided to reconsider its initial 2030 power capacity targets by increasing the share of renewables in the energy mix of Uzbekistan,” the energy ministry said in an emailed statement on August 10. “Low tariffs, obtained through the competitive process in the latest PV tenders have brought optimism to the Ministry of Energy on the cost structure of ultimate tariffs for businesses and households. Thus, the PV solar plant capacity may be increased from the current forecast of 5 GW to 7 GW and wind power generation from 3 GW to 5 GW.”

Energy Minister Alisher Sultanov said, as quoted by the ministry statement that “recent tenders showed some previously hidden potential in the renewables sector, and we are confident that exploiting this potential will be successful.”

Among the deals signed so far, in 2019, Uzbekistan picked Masdar Clean Energy of the United Arab Emirates as the winner of its first ever competitively tendered solar power public-private partnership (PPP) to develop a utility-scale solar plant located in Navoi Region. Since then, several other solar and wind agreements have been signed with Masdar and other firms.

While Uzbekistan works to boost renewable generation capacity, most of the remaining capacity will be from natural gas, and the old inefficient gas turbines would be replaced by combined cycle gas turbine (CCGT) power plants that can be ramped up or down depending on demand and the amount of energy from renewable sources entering the grid. By 2030 the government aims to have a minimum of 25% of power generation from renewables, no more than 2-3% coal and the remainder to be natural gas.

But it's not all down to the government and investors. To stop demand spiralling, there needs to be a change of culture to persuade people to start treating energy as a valuable resource, stressed Narmatov.

He cited data showing that people in Uzbekistan are using four times more energy units to heat one cubic metre of space compared to Europe, where higher energy prices (unlike the subsidised prices in Uzbekistan) and environmental awareness encourage people to conserve energy in their homes.

Narmatov believes that only removing subsidies for consumers — while keeping them in place for socially vulnerable households — can make people value the energy they consume. Respect for bread and other foods is part of Uzbek culture, where past famines have taught people to value food highly. By contrast, low prices have led to lavish use of energy for heating and lighting.

“Unfortunately [reducing consumption] is dependent on the cost [of energy]. When it comes cheap nobody cares; cheap things are not valued,” he said, stressing that a change in culture and attitudes is essential. “Of course it’s not gong to come easy, but we need to preserve the environment for future generations.”

He calculates Uzbekistan could save as much as 6bn cubic metres of gas a year — 2bn from energy efficient heating through the country, 3bn from a shift to renewables, and 1bn from modernising the gas transmission system and reducing losses. The government has already introduced new norms for energy efficiency in housing that must be met if apartment complex projects are to get the go ahead.

“I personally believe that energy efficiency is the key for sustainability in Uzbekistan,” said Narmatov, who has redesigned his own house to make it energy efficient by redoing the insulation and installing a solar heating system, and often answers questions about the technologies he used from interested passersby. There are also plans to educate children about the environment and the need to conserve energy to create an attitude shift in the next generation.

The government hopes that as market liberalisation brings power prices closer to the market price, individual homeowners will start to invest into their own solar installations. Not only will this reduce their bills for power and heating, they will also be able to put excess power back into the grid once the infrastructure is in place. The government has set up an energy efficiency fund that will compensate 30% of the costs for homeowners who invest into energy efficient technologies.

When Uzbekistan is able to shift from natural gas to other forms of generation and reduce over-consumption and avoidable losses, this will free up gas for processing to produce higher value products.

“For a long time Uzbekistan was an exporter of natural gas. We now want more processing to create a new added value chain and create more jobs in the country, rather than just exporting gas,” said Narmatov. “We want to make sure every cubic metre of gas or by-product is processed because initial estimations show we can make 10 times more from processing gas than just selling it.”

Currently there are over 40 projects in the pipeline aimed at various types of processing, among them two methanol to olefin (MTO) projects. State-owned oil and gas firm Uzbekneftegaz and South Africa’s Sasol are due to complete a gas to liquids (GTL) plant in the fourth quarter of this year. The plant will process 3.6bn cubic metres of gas a year to produce diesel, jet fuel and environmentally friendly synthetic liquid fuels. Most of the production will meet demand within Uzbekistan, allowing it to cut exports, but any excess would find a market in the region.

OPINION: Afghanistan’s neighbours recast refugee finance formula
Efforts to deploy US counterterrorism forces in Uzbekistan may not be over
Uzbekistan rights ombudswoman says she is on top of Karimova case