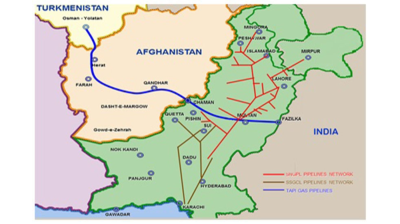 Uzbekistan plans to join the Turkmenistan-led $8bn-$10bn Turkmenistan-Afghanistan-Pakistan-India (TAPI) gas pipeline project, Uzbek President Shavkat Mirziyoyev said on April 23. The president did not clarify whether or not Tashkent will eventually ship gas through it.

Turkmenistan has committed to covering 85% of the project’s costs, which is something of a problem as the remote nation appears to be struggling to cover its own budget costs and the state is believed to be close to a full-blown economic crisis, or even collapse, thanks to low world oil prices and longstanding difficulties in diversifying gas exports beyond supplies to China. Some have called the TAPI pipeline a “do-or-die” project for the pariah nation - the worst performer in Freedom House's recently issued Nations in Transit report - that could bring in significant new revenues if it is ever completed. Uzbekistan’s support would deliver some welcome relief, given Ashgabat’s current woes.

“We have agreed that Uzbekistan will also take part in this project,” Mirziyoyev told reporters after meeting his Turkmen counterpart Gurbanguly Berdymukhamedov, who visited Uzbekistan last week. Since taking office in late 2016, reform-minded Mirziyoyev has been touring the region and reaching out to his neighbours with offers of mutual cooperation. He is attempting to open up the Uzbek economy after decades of isolation under the previous president, the late Islam Karimov, known for his paranoia when it came to Uzbekistan's neighbours.

Mirziyoyev has also positioned himself as mediator in the various conflicts in the region and offered to broker a peace deal between the Taliban and Kabul at an Afghanistan peace conference in Tashkent on March 27, which is a prerequisite for the pipeline’s construction. Though the Taliban did not attend the peace talks, to some analysts' surprise they did pledge to provide security for the construction and eventual operation of TAPI.

TAPI is expected to export 33bn cubic metres (bcm) of natural gas per year from Turkmenistan’s Galkynysh gas field, one of the world's largest hydrocarbon fields with estimated reserves of 13,100bcm of natural gas, to Pakistan and India via Afghanistan. The route has been under discussion in various forms since the collapse of the Soviet Union, but endemic corruption and fraternal rivalries between the various 'Stans' have stymied any progress in building the pipeline.

The four main gas companies in the countries involved in the TAPI project – Turkmengaz (Turkmenistan), Afghan Gas Enterprise (Afghanistan), GAIL (India) and Inter State Gas Systems (Pakistan) – each own an equal share of the TAPI pipeline company, as agreed in November 2014 when the enterprise was set up.

Uzbekistan is also a gas exporter, mainly to China and Russia, but its export volumes are significantly lower than those of neighbouring Turkmenistan - most Uzbek gas is consumed domestically, which is the hydrocarbon poor member of the Central Asian family.

Tashkent has been showing an ambition to increase its gas exports lately: neighbouring Tajikistan recently agreed to resume Uzbek gas exports for the first time since 2009.

After years of talk, construction on the pipeline has actually begun. The Afghan section of the pipeline, which launched in February, is seen as the riskiest segment of the project due to the presence of extremist groups in the conflict-torn country and its success or otherwise will determine the fate of the whole TAPI route.

The pipeline is also a do-or-die project for Afghanistan where the economy is in tatters after years of fighting. The country, badly in need of new infrastructure, remains dependent on its largely narco-economy.

The Afghan component of TAPI will follow the 557-km (346-mile) Kandahar-Herat highway. Afghan officials have previously said that Kabul will annually earn some $500mn in transit fees from TAPI and that the project will help create thousands of jobs.

Backers of the project, including the US and the Asian Development Bank (ADB), which says it will help ease energy deficits in South Asia as well as reduce tensions in the divided region.

However, the start of construction work on the Afghan segment of TAPI comes with the fate of the Turkmen section remaining unclear.

Uncertain state of the Turkmen section

There is little information on the state of the Turkmen section. While the government says it is under construction, the mere existence of it has been questioned by some analysts because of the lack of any tangible proof from the administration of the tightly controlled country and its eccentric leader, who last October unveiled the first Turkmen golf course in a country where golf is virtually unheard of.

The TAPI consortium wants its pipeline to start exporting gas to Pakistan by 2020. Turkmenistan hopes construction in Afghanistan and Pakistan will be finished by 2019. The deadline for the Indian segment of the pipeline is unclear.

The first work on the pipeline started in December 2015. The slow progress has to indicate that the construction of the infrastructure should be projected as taking longer than the originally set period of three years.

US and Chinese slowdown will tip the world into recession, says IIF
22 hours ago
NEO: Rising in the East, Setting in the West: Russia strengthens trade with Global East
2 days ago
Stagflation fears continue to rise
2 days ago
The economics of herding in Mongolia
3 days ago
EXPLAINER: how a price cap on Russian oil might work
4 days ago