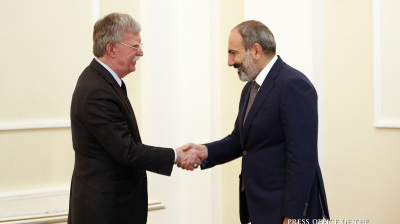 Uber-hawk White House national security advisor John Bolton took on the tricky issue of what strangling the Iranian economy could mean to Iran’s poor neighbour Armenia when speaking to journalists on October 25 during his visit to Yerevan.

However, from his reported remarks, it is not clear what stance Washington seriously expects small, impoverished Armenia to take towards continuing business with Iran during the US sanctions assault on the Islamic Republic. That's a particularly difficult question because Armenia—enduring an “unsplendid isolation”—has greatly constrained trade options. It does not have diplomatic relations with neighbours Azerbaijan and Turkey and, with Moscow as its watchful strategic ally, it has to be careful in relations with neighbouring Georgia, which still has tense relations with Russia over breakaway territories.

Bolton vowed that President Donald Trump's administration would "squeeze Iran" with maximum economic pressure in response to Tehran's "malign" behaviour in the Middle East and around the world, when interviewed by RFE/RL after he had met Armenian Acting Prime Minister Nikol Pashinian.

"As I explained to the prime minister, we want to put maximum pressure on Iran because it has not given up the pursuit of nuclear weapons," Bolton told the media outlet’s Armenian service. "It remains the world’s central banker of international terrorism. And we’re concerned about its ballistic-missile programmes and its active conventional military operations in Syria and Iraq and elsewhere."

Bolton reportedly insisted that Washington did not want to "cause damage to our friends in the process" of expanding sanctions against Iran, which shares a border with Armenia, a country of 2.9mn that badly needs to boost trade and investment with the Iranian market of 80mn.

He was also cited as saying that that's why he "stressed" to Pashinian, in advance, that the Trump administration is "going to enforce these sanctions very vigorously" and that the Armenian-Iranian border is "going to be a significant issue".

Supporting peace in Nagorno-Karabakh
Prior to arriving in Armenia, Bolton held talks with Azerbaijan's President Ilham Aliyev and Foreign Minister Elmar Mammadyarov in Baku. At a news briefing after those discussions, he pledged that Washington would continue to support a peaceful resolution to the conflict between Baku and Yerevan over the breakaway Nagorno-Karabakh region.

Bolton further told RFE/RL that he and Pashinian "talked a lot, obviously, about Nagorno-Karabakh," and that he is aware of the economic difficulties Armenia faces as a result of the "geographical situation and historical antecedents" related to the conflict.

In solidarity with Baku over Nagorno-Karabakh, over which the Armenians and Azerbaijanis fought a war from 1988 to 1994, Turkey has, like Azerbaijan, also closed its border with Armenia.

Demonstrating the building economic relationship between Armenia and Iran, the Iranians in mid-October announced the two countries are to jointly build an oil refinery by the border between its Aras Free Zone (AFZ) and Armenia’s Meghri Free Economic Zone (MFEZ).

In a reference to how Armenia could be left with only Georgia as a neighbouring trading partner if it refused to trade with Iran, Bolton also reportedly said that those "current circumstances highlight" the importance of Armenia and Azerbaijan "finding a mutually satisfactory agreement to the Nagorno-Karabakh issue", adding: "Once that happened, then the Armenian-Azerbaijani border would open. The Turkish border, I believe, would almost certainly open. And I think the border with Georgia might be less subject to concern about what pressure the Russians may be putting them under."

Exploring US weapons sales to Yerevan
Bolton, meanwhile, has informed Armenia that the Trump administration wants to explore possible weapons sales to Yerevan that would not violate US Congress restrictions on such sales to Azerbaijan and Armenia because of the status of the Nagorno-Karabakh conflict. The conflict is largely frozen but there have been sporadic outbreaks of hostilities over recent years. Baku is watching Pashinian’s policy on the region closely, given that he is expected to win a landslide triumph in a general election to be scheduled in Armenia for some time before mid-December.

Writing on his Facebook page on October 25, Pashinian said his talks with Bolton were held in “an extremely positive atmosphere”.

"I think there is a real opportunity to bring Armenia-U.S. relations to a new level. And we are ready to take advantage of this opportunity," Pashinian wrote.

Armenia has to tread carefully when it comes to strengthening relations with the US, the EU and Nato. Former activist and opposition MP Pashinian came to office after leading a “people power” revolution in the spring and he is waging a battle against cronyism, corruption, business monopolies and politicians of the dislodged establishment whom he claims are guilty of historical human rights abuses. It is not yet clear whether Russia, which maintains military bases in Armenia, is content with the direction he is leading the country in.