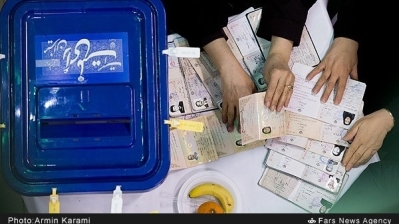 Voting in the Iranian parliamentary elections will take place on February 21.
By bne IntelliNews February 13, 2020

The US Senate on February 13 passed a bill to curtail President Donald Trump's ability to wage war on Iran without congressional approval. The Iran war powers resolution was approved by a vote of 55-45, with eight senators in Trump’s Republican Party voting for it. The president is expected to veto the bill once it reaches the White House.

The Trump-ordered US drone assassination in early January of Major General Qasem Soleimani, widely seen as Iran's second most powerful official, was conducted without any consultation with Congress and left Democrat House representatives and senators, as well as some Republican counterparts, anxious about Oval Office actions that could trigger a sudden all-out war between the US and Iran. Iran retaliated by attacking a US base in Iraq, causing traumatic brain injuries to 109 American service personnel. Washington and Tehran have been foes since at least the 1979 Islamic Revolution in Iran that toppled the US-backed shah and led to dozens of Americans being taken hostage inside the US embassy in Iran.

A day before the vote on the bill, Trump tweeted: "It is very important for our Country's SECURITY that the United States Senate not vote for the Iran War Powers Resolution."

"We are doing very well with Iran and this is not the time to show weakness... If my hands were tied, Iran would have a field day. Sends a very bad signal. The Democrats are only doing this as an attempt to embarrass the Republican Party."

The resolution requires Trump to remove troops engaged in hostilities with Iran unless Congress has declared war or passed a resolution permitting a specific use of force. It adds that no part of the resolution "shall be construed to prevent the United States from defending itself from imminent attack".

Virginia Senator Tim Kaine, who co-sponsored the legislation, supported the resolution's passage. He said: "If we're to order our young men and women in uniform to risk their lives and health in war, it should be on the basis of careful deliberation."

Earlier on February 13, the US Navy said that it had seized weapons believed to be of an Iranian "design and manufacture" from an Iranian dhow in the Arabian Sea.

There is a widespread perception in Iran that since the US stepped up hostilities with the Rouhani assassination—an action that many analysts have concluded was a flagrant breach of international law—the hardliners that have the ultimate say under Iran’s ruling regime have stepped up efforts to sideline reformists and moderates in the country’s parliament and presidency under pragmatic and moderate President Hassan Rouhani.

The president has criticised the Guardian Council, a hardline body which vets all candidates for elections. It has disqualified thousands of people, including 90 current lawmakers, who registered to run in the parliamentary elections—the week-long campaign for which got under way on February 13.

"In this election, 7,148 will compete for the parliament's 290 seats... and 7,296 have been disqualified," the Iran Students’ News Agency (ISNA) quoted National Elections Commission chief Jamal Oorf as saying.

Iranians are typically enthusiastic about their elections, but there are fears that the vetting which is widely seen as having largely turned the February 21 poll into a contest between hardliners and conservatives will seriously dent turnout as people stay away to protest against the candidate exclusions.

Despite the disqualifications of candidates, Rouhani has strenuously urged people to “not be passive” and to go ahead and vote. "The Americans do not understand the greatness of the Iranian people," he earlier this week told a crowd of pro-regime supporters holding banners including "Death to America" and "We will resist until the end."

In the 2016 parliamentary vote, a bloc of reformists and moderate conservatives won 41% of the seats. Hardliners won 29% and independents took 28%.

Forecasts show that Iran is “moving toward the third wave of the coronavirus, and it seems the wave will take shape in Tehran much earlier than other provinces," Alireza Zali, the anti-coronavirus ... more

Joe Biden has said that he is “ready to walk the path of diplomacy” with Tehran “if Iran takes steps to show it is ready too”. Outlining the Iran policy he will pursue if he defeats US ... more