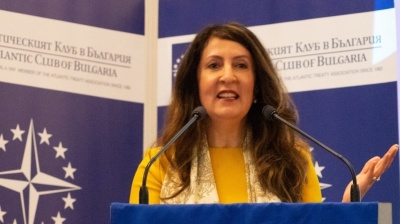 The US would sanction Bulgarian politicians if it has a trustworthy information that they have been involved in significant corruption, Herro Mustafa, the new US ambassador to Bulgaria, said on November 29.

In a speech held at a meeting of the Atlantic Club in Sofia, Mustafa said that strengthening democracy and the rule of law is among her top priorities during her three-year mandate.

“Aided by our new resident legal advisor who arrives in Sofia in just a few days, I plan to work with both government and civil society to strengthen the primacy of the law, foster judicial independence, and tackle corruption. We plan to take a multifaceted approach to this task, including the use of tools that have teeth,” Mustafa said.

She added that among the tools is US legislation that allows implementation of visa bans on foreign officials and their immediate family members who have engaged in significant corruption.

“Such tough measures will benefit Bulgaria in the long term as a firm adherence to the rule of law is inextricably tied to Bulgaria’s political and economic prowess,” Mustafa said.

Her speech came days after a new chief prosecutor was appointed following a highly controversial election procedure and despite numerous protests in the country.

Mustafa also pointed out that Bulgaria should work to secure media freedom.

The country has been singled out as having the least free media in the EU and in the Balkans, ranking 111th in the world press freedom index from Reporters Without Borders.

“The US will continue to support Bulgarian civil society, promote a free and transparent media space, and highlight the importance of protecting human rights. In striving for progress in the rule of law sphere, I very much cherish the partnership between the Embassy and nongovernmental organizations that devote their efforts to develop Bulgaria’s human capital, promote justice reform, and contribute to Bulgaria’s ongoing success and private business sector development,” Mustafa said.