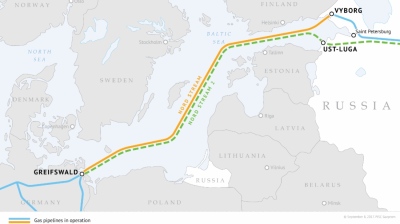 The US may be prepared to enter talks with Germany on easing its sanctions on Nord Stream 2, German business paper Handelsblatt has said, signalling that the Biden administration may have resigned itself to the fact that the Russian pipeline will be completed.

Washington has been an ardent opponent of Nord Stream 2, causing clashes with Germany and its other European allies that are anticipating economic gains from the project. However, the new US administration has signalled it could be willing to discuss lifting its sanctions, Handelsblatt reported, citing a US official involved in the talks. The report comes after US Press Secretary Jen Psaki said in late January that the Biden administration would review sanctions imposed by its predecessor.

Work on Nord Stream 2 ground to a halt in December 2019, after the US imposed its first sanctions on the project, initially targeting only the owners of pipe-layers. Russia responded by deploying its own pipe-laying vessels, which began work in German waters towards the end of last year.

Washington was expected to expand its sanctions regime in the near future, following the passing of a bill by both houses of US Congress. These new measures will also target those providing technical certification and insurance, as well as other construction activities such as surveying, trenching and rock replacement. The threat has led to a number of companies pulling out of the project, including German engineering firm Bilfinger, Swiss insurer Zurich Insurance and Norwegian classification society DNV GL.

Only less than 5% of the pipeline is left to complete, though, and Germany’s support for the project has not wavered, despite intensified US pressure and international outrage over Moscow’s treatment of opposition leader Alexei Navalny and his supporters. The US may therefore have conceded that its efforts have failed.

While former US President Donald Trump avoided criticism of Russia, he expressed strong opposition to Nord Stream 2. Rather than citing political considerations, Trump did not disguise the fact his chief concern was the competition that the Russian pipeline posed to US LNG.

His successor Joe Biden has also said Nord Stream 2 is “a bad idea” for Europe. But Biden is likely to prioritise improving ties with US allies over protecting the country's share of the global gas market, given his green agenda.

Before easing its sanctions, though, the US wants certain things in return, according to Handelsblatt. It is reportedly seeking a guarantee that Russian gas flows via Ukraine will be maintained, and that the US has a mechanism for switching off Nord Stream 2 if Ukrainian supplies falter. Under a contract running until the end of 2024, Russia has to pay fees covering 40bn cubic metres per year of gas transit via Ukraine, regardless of how much it actually sends. Once this contract expires, though, Gazprom will be free to divert all flows to Nord Stream 2 if it is ready.

Klaus Ernst, the head of Germany’s Bundestag Committee on Economic Affairs and Energy, has already responded to the report by ruling out any mechanism that would allow the US to shut down the pipeline at will.

Gazprom has warned investors that there is a risk that Nord Stream 2 could be “suspended or entirely discontinued due to extraordinary circumstances, including local pressure.”

Besides US pressure, the pipeline is opposed by a number of Eastern European countries. France, the EU’s second most influential member, has also urged Germany to rethink its support in light of the Navalny case.

“We have already said we have the greatest doubts on this project in this context,” European Affairs Minister Clement Beaune told France Inter radio on February 1. Asked if France wanted Berlin to withdraw its backing, he said: “Indeed, we have already said this.”

More sanctions were a possible option, he said, while acknowledging that “it’s a decision for Germany, because the pipeline is in Germany.”

Still, the consensus among analysts is that the 55 bcm per year pipeline will reach completion, albeit after some time.

“Our position has long been that Nord Stream 2 was likely to be finished in one to two years regardless of US efforts, and that ramp-up to full capacity afterwards would likely take several years,” BCS Global Markets said in a research note. “This news only tends to confirm our view, and is positive for Gazprom sentiment.”

Dmitry Medvedev, Deputy Chairman of Russia’s Security Council, said on February 1 that Moscow was still confident that the pipeline would be finished, despite US interference. But he warned that Russia would consider legal action against attempts to thwart the project.

Whether or not Nord Stream 2 flows gas will ultimately be decided by Germany, which has repeatedly defended the project as commercial rather than political in nature. It has even taken steps to shield the pipeline from tougher US sanctions. However, all eyes are on whether Berlin’s resolve will weaken in the face of the mass detention of protesters across Russia.

Navalny returned to Moscow on January 17 from Berlin, where he was being treated for poisoning from a Novichok nerve agent, which he says was carried out by Russian security services. Tens of thousands took to the streets of Russia’s largest cities on January 23, followed by similarly sized protests on January 31. Further protests erupted after a Moscow court on February 2 sentenced Navalny to two years and eight months in a prison colony.