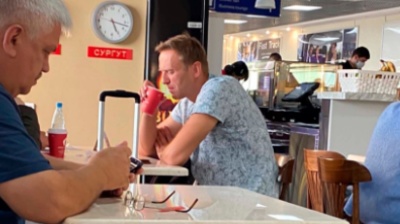 Russian anti-corruption blogger and opposition activist Alexei Navalny was hospitalised on August 20 and is in intensive care after he drank a cup of poisoned tea, his staff claim.

A sharp critic of Russian President Vladimir Putin, Navalny was on his way back to Moscow from Tomsk when his plane made an emergency landing at Omsk after he complained of intense stomach pains. Emergency medical workers removed the unconscious Navalny from the plane and took him to hospital by ambulance.

“This morning Navalny was returning to Moscow from Tomsk. On the flight he started feeling ill. The plane made an emergency landing in Omsk. Alexei has been poisoned with a toxin. Right now we’re in an ambulance on the way to the hospital,” tweeted press secretary Kira Yarmish, who later said her boss was in the ICU. "We assume that Alexei was poisoned with something mixed into the tea. That was the only thing he drank this morning. The doctors say that the toxin was absorbed more quickly because of the hot liquid. Right now Alexei is unconscious.”

Doctors later walked back their comments and said no diagnosis has been given. Yarmish reports a change in attitude in the doctors, who had suddenly become reticent and uncommunicative a few hours after Navalny was admitted to hospital, whereas they had been friendly and cooperative shortly after Navalny arrived at hospital. According to the preliminary diagnosis shared with Navalny's people he was given a psychodisleptic, a hallucinogenic that brings on a dreamlike state.

As of midday on August 20 Navalny was still comatosed in the ICU unit on a ventilator in a serious but stable condition.

Navalny has been an outspoken critic of the Kremlin and organised constant rallies and protests, but has never managed to garner the popular support to seriously threaten Putin’s rule.

Most recently, Navalny called the July referendum to change the constitution and allow Putin to stay on an additional two presidential terms to 2036 a "coup" and a "violation of the constitution".

However, it is still too early to jump to conclusions and blame the Kremlin. In his long career Navalny has made a lot of enemies.

“Navalny is not only Russia's leading opposition politician — he's also, in effect, one of the country's top investigative journalists. His video investigations, which are always exceptionally produced to be clear and understandable to ordinary people, are exemplars of the genre. He follows the money, highlights unearned wealth, and explains how it all fits into the corrupt system Putin has built. He has enemies everywhere, and not just at the very top. That's why it's *way* too early to speculate about who may have poisoned him (if indeed he really was poisoned!). Just please don't jump to "PUTIN DID THIS" without evidence. That's not always how things work, and this may indeed prove to be very awkward and tricky for Putin,” tweeted ILya Lozovsky, editor and staff writer at the anti-corruption NGO OCCRP.

There have been several suspected cases of high-profile critics of the Kremlin being poisoned. The most famous is that of Alexander Litvinenko, a former FSB officer that went to London where he worked for oligarch Boris Berezovsky and died after drinking tea laced with the highly radioactive element polonium.

Another prominent Kremlin critic Vladimir Kara-Murza was poisoned twice in 2015 and 2017. The second time he had to be put into a medically induced coma after he fell gravely ill from “acute poisoning by an undefined substance,” according to doctors. He eventually recovered.

Kara-Murza works for oligarch Mikhail Khodorkovsky’s Open Russia foundation that has been campaigning against Putin. Kara-Murza had produced a documentary film about his friend Boris Nemtsov, the opposition leader and former deputy prime minister who was gunned down near the Kremlin in 2015.

Both Khodorkovsky and Berezovsky became billionaires in the 1990s while Boris Yeltsin was president but clashed with Putin after he took office in 2000 and fled the country. Berezovsky later died in an “auto-affixation” accident while living in a borrowed home in the UK, but Khodorkovsky remains active and is based in London, according to reports.

This is not the first time that Navalny claims to have been poisoned. He filed an official complaint claiming he had been poisoned in August 2019 while in detention. He was rushed to hospital with “severe swelling of the face and skin redness” but discharged back into custody a day later.

His legal team asked for a forensic examination to identify the agent used, and for checks on the video surveillance in Navalny’s detention room, which were refused. Prison doctors later said they could find no sign of a toxic agent.

Navalny had been jailed for 30 days for urging people to take part in unauthorised protests that month.

Other high profile poisonings include:

Ex-spy Sergei Skripal, who was poisoned with the military grade agent Novichok in 2018  in the UK; Pussy Riot member Pyotr Verzilov who is believed to have been poisoned in 2018 during a court proceeding; reporter Anna Politkovskaya who reported on corruption in Chechnya was poisoned in 2004 and eventually assassinated in 2006; the former president of Ukraine Viktor Yushchenko was given a dioxin, the active ingredient in Agent Orange, in 2004 and nearly died; and Russian investigative journalist Yuri Shchekochikhin who died suddenly in 2003 from symptoms associated with radio active poisoning a few days before he was due to meet FBI agents in New York and share information on Russian high level corruption.