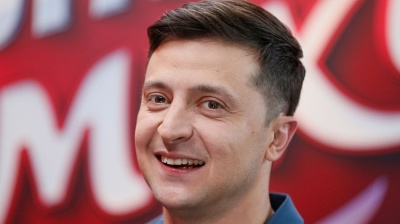 Volodymyr Zelenskiy has released some details of what he would should he win the second round vote on April 21.
By bne IntelliNews April 11, 2019

Having said very little about his policy plans comic and Ukrainian presidential front-runner Volodymyr Zelenskiy has released some details of what he would should he win the second round vote on April 21.

While President Petro Poroshenko has framed his campaign in terms of “me or Putin” playing on his national security agenda and track record of facing down Russian aggression, Zelenskiy has launched a “past and future” campaign that plays on the administration’s failure to delivery on the promises of Maidan and the need to focus improving the quality of life.

Zelenskiy also attempted to counter Poroshenko’s attack on his lack of experience by disclosing a list of his potential key officials and the first ten reform steps he would take, reports the liga.net news agency reported on April 9, citing campaign ideologue Ruslan Stefanchuk and Danylo Hetmantsev, the campaign’s expert on economic and financial issues.

1.Invite British and American diplomats to the negotiations to resolve the war in Donbas. Remove Putin confidante and Ukrainian citizen Viktor Medvedchuk from the negotiations.

2.Eliminate the competition between the Defense Ministry and the General Staff of the Armed Forces of Ukraine.

4.Submit a bill to parliament creating a legal mediation alternative to litigation.

5.Submit bills to parliament introducing a 5% tax amnesty starting 2020, a tax on capital withdrawals, an international exchange of tax information and creating a Financial Investigations Service.

6.Submit to parliament a legislative package creating the legal framework for national and local referenda and petitions, recalling MPs, and impeaching the president.

7.Conduct a state audit over a four-month period.

8.Introduce a “secret plan” for parliament. If Zelenskiy is unable to achieve cooperation with MPs, other options will be available that “will impress many”.

9.Reform the Presidential Administration to eliminate “curators” of public affairs and to focus on its clerical functions, including developing reform ideas.

“This list of promises goes a long way to remove doubts in the minds of voters about Zelenskiy’s commitment to Ukraine’s Western integration. And this list helps to create the impression among voters that Zelenskiy represents, at minimum, the prospect for reforms and improvement. Meanwhile, the campaign of President Petro Poroshenko is creating the impression that Ukraine will endure five more years of warfare, corruption and economic stagnation,” Zenon Zawada of Concorde Capital said in a note.

“Such moves make Zelenskiy’s victory at the April 21 runoff vote all the more likely. The release of the list of key officials, as well as their willingness to serve in a Zelenskiy administration, will provide an even further boost to his prospects for victory.”