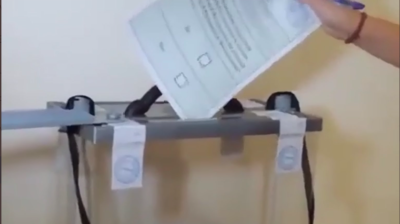 Russia’s sham referenda in Ukraine’s occupied territories are proving to be as undemocratic as predicted. Reports from the regions claim citizens are being forced to vote at gunpoint to join the Russian Federation, with viral videos on social media showing armed soldiers going door to door accompanying the “voting brigade” in South Ukraine on September 23.

Self-proclaimed leaders of the occupied territories announced that “referenda” will be held from September 23-27 in the regions of Donetsk, Luhansk, Kherson and Zaporizhzhia. The timing of the votes, which have been in discussion for months, come as Ukraine retakes vast swathes of land in its successful eastern counter-offensive, panicking Russian proxies and Kremlin figureheads.

The vote has been slammed by both Ukrainian and foreign politicians as fraudulent, with even Russian ally Serbia refusing to back Moscow. According to the Ukrainian Ministry of Reintegration of the Temporary Occupied Territories, eight other countries aside from Russia have sent observers, including Belarus, Syria, Brazil, Venezuela, South Africa, Egypt, Uruguay and Togo. The Ministry denounced the countries as "participating in a collective crime against the soverign, independent state of Ukraine".

A photo of the ballots in Zaporizhzhia region published by Euromaidan Press shows that they lack unique verification numbers, required by law in Ukraine, meaning they are totally void in any legal sense. Moreover, photos circulating online showing people submitting empty ballots and viral videos of soldiers going door to door with voting “officials” have prompted accusations that the decision to annex the territories has already been decided. 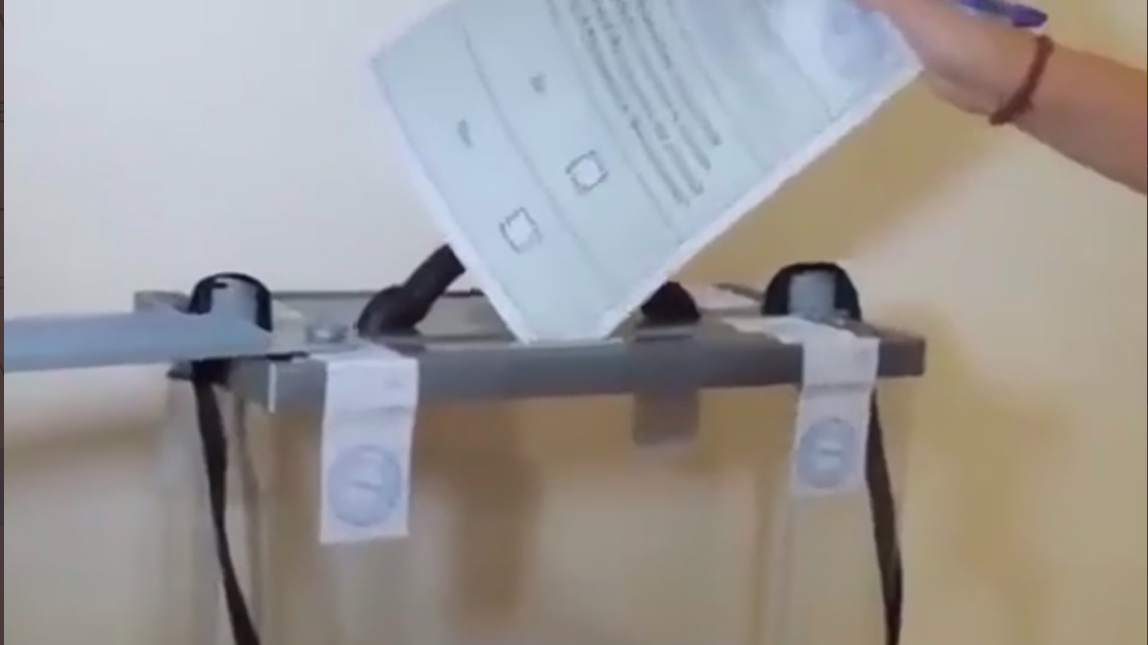 “My family was just forced to vote at gunpoint in russian cosplay of a “referendum” in southern ukraine: – they come to your house – you have to openly tick the box for being annexed by russia (or for staying with ukraine if you feel suicidal ) – all while armed gunmen watch you,” Ukrainian journalist Maksim Eristavi wrote on Twitter.

Mykhailo Podoliak, advisor to Ukrainian President Volodymyr Zelenskiy, described it as a "propaganda show for z-conscription" and there is speculation that Russia will use the annexation to conscript Ukrainian citizens living in the occupied regions. The EU and G7 countries have announced further sanctions will be implemented in response to the referenda and Moscow’s swelling aggression.

In a startling escalation last week, Russian President Vladimir Putin called for the partial mobilisation of an additional 300,000 men and threatened to use Russia’s nuclear arsenal, telling listeners he is not bluffing. Putin’s diatribe has alarmed many Ukrainian and Western figures as the Kremlin’s unpredictability jeopardises global stability.

“Fake referendums are a Russian trick to legitimise the presence of their troops and even more, to attack including possible nuclear weapons from the territory captured by Putin in this fake referendum,” former Ukrainian president Petro Poroshenko tweeted on September 24.

Poroshenko’s concerns come after Kremlin propagandist Margarita Simonyan voiced support for the pseudo-referenda, saying that if Moscow recognises the regions as part of Russia, then the Kremlin could more easily threaten Kyiv and Nato with ‘legitimate’ strikes in response to Ukraine’s counterattacks.

The results of the votes will be announced on September 28. However, pro-Kremlin propaganda has already predicted an overwhelming victory in favour of joining Russia.  A Russian-issued newspaper in Kherson called Naoonepryanskaya Pravda predicts that 94% in the self-proclaimed “Donetsk People’s Republic” will vote yes, 93% in the self-proclaimed “Luhansk People’s Republic”, 87% in Zaporzhzhia and 80% in Kherson.

Donetsk, Luhansk, Zaporizhzhia and Kherson are not entirely occupied and as such Russia won’t be able to annex the Ukrainian-controlled territories. Nevertheless, Russian occupiers claim nearly 50% of Luhansk Oblast has turned out to vote, despite a severely depleted population. Serhiy Haidai, head of the Luhansk Military Administration, claims that Russian authorities are even including dead people to inflate the vote, Ukrainian Pravda reported.

"There are certainly plenty of voters. A resident of Alchevsk at the front, or in captivity, or already dead, will also vote somehow. Perhaps their vote will be taken into account telepathically,” Haidai stated.

“They’re calling people on the phone. Employees who refuse to come to the ‘election precinct’ are being threatened with dismissal. The occupying authorities even find people who’ve left for Russia. They invite them to vote there as well," he added.

The farcical results of the sham referenda will undoubtedly be in Russia’s favour. Nevertheless, Ukraine’s allies announced they will defend Ukraine’s sovereignty. US National Security Advisor Jake Sullivan said on September 20 that the United States “will never recognise this territory as anything other than a part of Ukraine”. Meanwhile, Nato Secretary-General Jens Stoltenberg said that “[sham referenda] will only further worsen the situation, and therefore we need to provide more support to Ukraine.”

Once the results are announced, the territories will first become independent before merging with the Russian Federation, as stated in the Zaporizhzhia ballot. It is unknown what exactly the impact will be; however, the Institute for the Study of War reported that Putin will likely use the “newly claimed Russian territory” to garner more troops for the war. But with Russia failing on the battlefield and protests erupting in response to the partial mobilisation, the sham referenda are no more than a Sisyphian attempt to regain support for an ailing war.