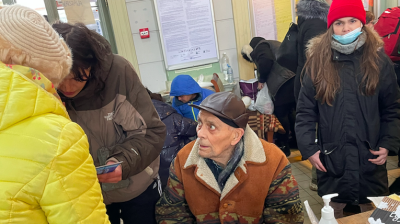 Refugees at a reception point in Przemysl train station near the border with Ukraine. / Wojciech Kosc
By Wojciech Kosc in Warsaw May 30, 2022

The very moment Russian bombs began falling on Ukraine on February 24 it became clear Europe was in for a new migration crisis. Poland was always going to feel it the most out of all Ukraine’s neighbours.

As the war’s end appears elusive and far into the future, Poland is facing the challenge of integrating refugees and their children in an effort that is as much humanitarian as it is for the economic benefit of both Poland and Ukraine. Basic scenarios assume a long-term rise in GDP growth but no impact on Poland’s demographic woes.

Not even 48 hours had passed since the invasion and Polish train stations along the border were filled with refugees seeking safety. As the war raged for weeks, then months, the Ukrainians – nearly all of them women and children – braced themselves for the inevitable new reality of living new lives in a new country. That meant finding homes and work.

“If there’s someone to look after my child then yes, I am going to work. Otherwise, I just don’t know,” Nastya Valah, a 22-year old fitness trainer from Dnipro, told bne IntelliNews in March, as she waited for a Warsaw-bound train to depart from the border town of Przemysl.

Stories like Valah’s have since been multiplied by the order of millions.

Aside from the human side to them – Valah arrived in Poland with one bag and her then 21-month son, worried how she would ever get a job if she couldn’t find care for the toddler – there quickly appeared questions about the macro impact of the biggest migration wave since World War Two.

To date, nearly 3.7mn Ukrainians have crossed the border with Poland, the country’s Border Guard said in a daily update on May 29. Not all of them have stayed, with some moving on to Germany and elsewhere in Western Europe. Some have returned to Ukraine, as the western part of the country has been spared the destruction seen in Mariupol or Kharkiv.

There are 1.2mn-1.5mn Ukrainian refugees in Poland currently, according to government estimates, the Ministry of Home Affairs said on May 25.

Their sheer presence and the need for clothing, food and other essentials boosted Poland’s retail sales figures in March and April. For example, sales of textiles, clothing and shoes jumped 41.9% year on year in March before going up further to 121.4% y/y in April, data from Poland’s statistical office GUS showed.

Demand-wise, then, the influx of refugees has propped up consumption, the long-time driver of economic growth in Poland. That will likely ease the expected slowdown in spending due to inflation and the higher cost of living.

But that will only be temporary if refugees do not find jobs (assuming other headwinds, especially the ripple effects of the war, are relatively mild), a place to stay and facilities to ensure care and education for their children.

Poland has long struggled with a huge undersupply of labour, which the pre-war migration from Ukraine – estimated at around 1.5mn – has only reduced to an extent, as seen in data covering wage growth. Polish gross wages expanded 9.6% in 2021.

While the influx of another 1.5mn people will supply some sectors with much-needed labour, the impact will be uneven.

Most refugees are women (very often with children) who will likely find employment in trade and non-specialised service activities. On the other hand, Ukrainian men have been leaving Poland to fight against Russia. That has deepened labour shortages in industries like construction or transport.

The overarching goal of the Polish government should be full integration of Ukrainians – where they end up and whatever they are going to do – because that will pay off for everyone, a recent report on refugees’ impact on Polish economy concluded.

“Even if today it is primarily an organisational challenge and a financial effort for the state and its citizens, [integration] should also be seen as a kind of investment – both in good relations with Ukrainians as well as in economy and labour market,” ARC, a market analysis company, said in the report.

So far, only a third of adult refugees have taken up jobs in Poland, the government has estimated.

Finding work is made complicated by an array of factors. Well over a third of all refugees are children, taking care of whom limits the options for adults, the ARC report found. Making sure Ukrainian children can attend nurseries, kindergartens and schools will be key for their mums to gain time to find and go to work.

Another problem is language, although, arguably, it will be a short-lived issue, with close to 80% of refugees having either started learning Polish or being about to do so. Ukrainian is also similar to Polish.

Plans for an uncertain future

The same ARC report found that 54% of Ukrainian refugees plan to find a job in Poland, hedging against a protracted war in their home country.

Perhaps a surprisingly large number – some 27% – told the researchers that they were intending to settle in Poland for good, even if the war comes to an end fairly soon. That includes 30% in the 18-24 age group and 26% in the 24-34 age group.

The report’s estimates are just a snapshot of refugees’ sentiment here and now, with the future course of the main determinant of their situations – the war – difficult to chart. But there are solid enough premises that Poland stands to benefit from the population boost.

“Favourable government policy, cultural and language similarities, a tight labour market, and high wage growth all increase the chances that a significant share of the refugees will stay,” the report said.

On the other hand, Poland’s long-unsolved structural problems, with housing and the quality of public services, will likely limit the positives, Oxford Economics also said.