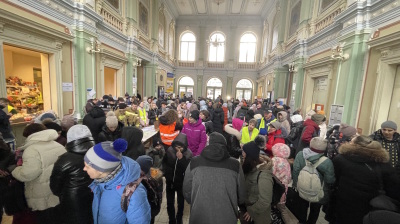 With every train from the Ukraine side calling at Przemysl station, it fills up with new refugees, most of them women and children.
By Wojciech Kosc in Przemysl March 22, 2022

“Putin is a bastard. Lukashenka is another,” says Luba, 50, as she drags a huge suitcase along the platform at the Przemysl train station on the eastern Polish border. A Polish volunteer by her side drags her other belongings.

Before the war started, Luba worked as a nurse in a kindergarten in Zhytomyr, a town of nearly 270,000 some 130 km west of the capital Kyiv. Now she is frantic over what has happened to her, her family, and the kindergarten kids she took care of.

“I have always taught kids to be kind, not evil. And now small children, their fathers and mothers are just fleeing… And do you know how many people are dying in Ukraine? No one even publishes these numbers,” Luba says.

Luba is one of nearly 2.2mn Ukrainian refugees who have sought safety in Poland since Russia invaded Ukraine on February 24. Thousands have arrived in Przemysl– it took Luba five days, she says, almost crying – typically via Lviv, one of the last major Ukrainian cities to have been spared destruction so far.

Life at the Przemysl station now goes in sync with trains arriving from Lviv, two and a half hours away. With every train from the Ukrainian side calling at the station, it fills up with new refugees, most of them women and children.

In front of the station building there is a crowd of refugees. Between them Polish and Ukrainian volunteers are trying to offer the distressed people information and, more importantly, food.

A small line has formed at a stand with SIM cards, which Polish mobile operators hand out either for free or at a discount. Police, firemen, and journalists are everywhere.

Inside, the station building is crammed. Beside the walls many refugees are sleeping, exhausted after the ordeal they had to go through to get to Poland. Some are lining up at food and water points, which seem to always run out and then be replenished, as volunteers keep delivering big boxes with lunches and water all the time.

Some refugees are standing around a table with a map of Poland on which volunteers explain, the train timetables in their hands, where and at what times trains leave from Przemysl.

Nastya Valah, 22, is desperate to get to Warsaw, where her friends live. She has just arrived from Dnipro, a town of nearly one million people, 200 kilometres south of the heavily shelled Kharkiv.

“There are a lot of refugees in our city. From Kharkiv, Kyiv, Mariupol and all over Ukraine. It’s slightly quieter in Dnipro, but they say something bad might begin there soon, too,” Valah says. “War is scary,” she says.

A fitness trainer in Dnipro, Valah says she will try to find a job in Warsaw – as long as she can find care for her son, who is just 21 months old.

“If there’s someone to look after my child then yes, I am going to work. He’s too small for a kindergarten for at least three more months. Otherwise, I just don’t know. We came here with literally one bag. I only took a stroller from here,” Valah says.

These days, Poles are leaving strollers or items like crutches or wheelchairs in case any sick or elderly refugees might need them. The biggest migration to Poland since World War Two will change Poland forever, experts say.

But for now, no one on the ground thinks about how the government should respond or that there are already political forces trying to pitch Poles against the Ukrainian refugees.

Yet, these factors could soon weigh heavily on day-to-day life in a country, the population of which grew 5% in under four weeks. Konfederacja, Poland’s far-right party, has recently staged a press briefing under the headline of “Help, not privileges”, which argued that initiatives such as free public transit for refugees could lead to “social tension”.

Poland’s civil society has responded ahead of the government with a countrywide effort to help. There are countless money-raisers, tens of thousands of Poles are letting their flats to refugee families and are on the lookout for jobs for them.

Marta is a teacher of the Polish language from Lublin, the biggest Polish city near the Ukrainian border. Since early March, she has lived with a Ukrainian mother, her two-year old son and an 11-year old niece.

“I’ve given them the living room and the bedroom and I have moved to the smallest room. The mother is a paramedic and she would like to work as one here in Poland but it’s tough without the language. I think it’s going to a problem for many refugees. Their kids will learn Polish naturally in school but what about their parents?” Marta says.

“For now, they’re going to live with me,” Marta says.

Meanwhile, Luba, who has got on her train to Poznan that is about to depart, is growing even more agitated. Her daughter, who is 27, has remained in the still relatively quiet western Ukraine, in Rivne.

“She stayed in Rivne to help refugees from places like Kharkiv,” Luba says.

“No one thought they would invade with tanks. Nobody wants to! But it’s not us who came to another country so we have to. Putin, you bastard,” she says.