Ukrainian President Poroshenko added $19.7mn to his fortune in 2018 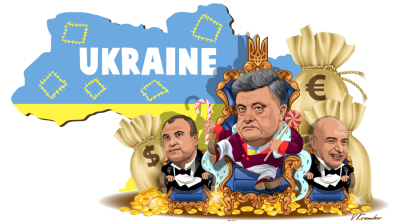 Ukrainian President Petro Poroshenko added $19.7mn to his fortune in 2018 according to his official declaration.
By Ben Aris in Berlin January 7, 2019

The president of Ukraine Petro Poroshenko remains one of the richest men in the country and added UAH548.679mn ($19.7mn) to his fortune in 2018 from dividend payments from his businesses nominally held in trust by Rothschild Trust Schweiz AG, the president’s office reported at the end of 2018.

The head of state reported on a significant change in the property status in the unified state register of declarations of persons authorised to perform the functions of the state or local governance on January 1, 2019.

The receipt from Rothschild Trust Schweiz AG of the previous tranche of dividends in the amount of UAH556.742mn, which Poroshenko declared on December 26, 2018, is also recorded in the register.

However, the declaration almost certainly understates Poroshenko’s income from his businesses. As bne IntelliNews reported in an investigation into Poroshenko’s business “Poroshenko’s empire – the business of being Ukraine’s president,” Prime Asset Capital is an opaque holding company used by Poroshenko and his closest business associates to manage his investments.

While the president claims he has moved his business interests to a blind trust managed by Rothschild Trust Schweiz AG, the investigation showed that the president remains in direct control of many of his businesses operations and others, that benefit from spending by the state budget, appear to be still connected to the president indirectly, partly controlled by the Prime Asset Capital. In some cases, like the president’s holding of the TV5 broadcaster, Poroshenko has publicly said he has not given up control nor does he intend to.

In 2015 not only did Poroshenko’s personal fortune rise to $858mn, he was the only one of Ukraine’s wealthy businessmen to see his net worth actually increase that year.

Poroshenko has blurred the line between business and politics, deflected anti-corruption efforts at every turn, and the businesses and politicians associated with him are flourishing at a time when Ukraine’s economy is mired in its worst crisis since the country’s independence in 1991, the bne IntelliNews investigation concluded.