Ukraine’s international reserves have increased by almost 14% in August to $25.4bn 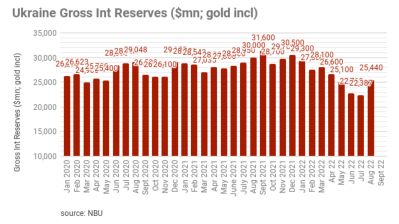 Ukraine was running out of money, but after the US sent $4.5bn in August and with more on its way from the EU, Kyiv's finances have dramatically improved in the last month. / bne IntelliNews
By bne IntelliNews September 7, 2022

The gross international reserves (GIR) of the Ukrainian central bank rose 13.6% in August to $25.44bn after the government received billions of dollars in support from its international partners and started to see the benefit from frozen debt repayment deals.

Ukraine has been forced to tap into its reserves since the war started in February and has in effect been cut off from issuing new debt on either the international or the domestic bond markets.

With the economy in freefall, the government has been running an approximately $5bn deficit each month, including international debt redemption payments that have eaten into the reserves. On top of that, millions of Ukrainians have fled to the safety of neighbouring countries and have been withdrawing circa $1.5bn worth of foreign exchange using their bank cards, which the National Bank of Ukraine (NBU) has been forced to service.

Reserves were already falling during the coronavirus (COVID-19) pandemic from a peak of $31.6bn in September 2021 but had begun to recover again in December last year. However, since the start of the war the fall has accelerated and dropped to a low of $22.4bn in July. (chart)

In August, foreign currency inflows to the government’s accounts amounted to more than $4.7bn, as the government received half of a $9bn grant to support budget expenditure. Canada, Italy and the EU also sent money to relieve pressure on the budget.

And more cash is on the way. The EU will release €500mn in planned aid to Ukraine from a total of €8bn still outstanding, following a meeting between the EU-Ukraine Association Council and Ukrainian Prime Minister Denys Shmyhal in Brussels on September 5. At the end of May, the EU pledged €9bn to Ukraine but has only delivered €1bn so far, leading to a precarious relationship between Kyiv and Brussels. Ukrainian President Volodymyr Zelenskiy accused the Union of blocking the much-needed funding, and asked if Berlin was a “criminal” for holding up the payments.

Some of that money will be released in September after EU states, except for Hungary, agreed to provide €5bn in aid to Ukraine in the next round of tranches. EU economy ministers are expected to sign a political declaration in support of the macro-financial assistance package in Prague, Brussels-based publication Euractiv reported.

With the international aid now flowing, plus the restart of grain exports that could earn up to $20bn this year, Ukraine’s financial position has dramatically improved in the last month and a possible balance of payments crisis seems to have been averted, as a result of receiving money from the USA, the EU, Canada and Italy, as well as from placing OVDP bonds and other creditors.

At the same time, the government paid $165.4mn in debt to international creditors and spent $6.5mn on servicing the OVDP. In addition, Ukraine paid $221.1mn to the IMF. The current volume of international reserves is sufficient to provide financing for four months of future imports.