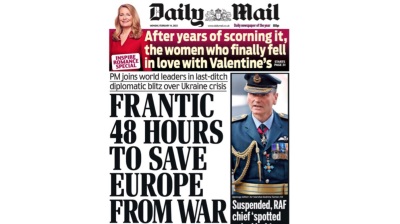 Ukraine's ambassador to the UK, Vadym Prystaiko, told the BBC in an interview that Kyiv might give up its aspiration to join Nato in order to avert a war as many predict an invasion is days away / wiki
By Ben Aris in Berlin February 14, 2022

Ukraine's ambassador to the UK, Vadym Prystaiko, told the BBC in an interview that Kyiv might give up its aspiration to join Nato in order to avert a war on February 14.

Tensions and the fear have ratcheted up dramatically since a briefing by White House national-security adviser Jake Sullivan on February 12 that warned a Russian attack on Ukraine could come “any day.”

Russia launched large-scale military exercises in Belarus on February 10 that are due to run to February 20 with over 30,000 combat ready troops. At the same time naval vessels, including landing craft, were sent from the Baltic Sea last week and have just arrived in the Black Sea at the end of last week for more exercises.

The Kremlin has repeatedly said it will not attack Ukraine, but the White House says it has new intelligence that an attack could happen as Russia has put much of the force needed to invade Ukraine into place.

Analysts say this week could prove decisive as a last round of diplomacy attempts to de-escalate tensions. German Chancellor Olaf Scholz is due in Kyiv today to meet with his counterpart Ukrainian president Volodymyr Zelenskiy and will be in Moscow on February 15 to meet with Russian President Vladimir Putin.

After that meeting Putin will have met with leaders all the major western powers. Putin has yet to comment decisively on the diplomatic process the Russian Foreign Ministry launched in the middle of December with its eight point list of demands. Nor has decisively commented on the letter from the US that formally answered those demands that was leaked to Spanish newspaper El Pais.

Russia has made it clear that it wants an “ironclad” legally binding assurance that Ukraine will “never ever” join Nato, a demand that the West rejected out of hand. Russian foreign minister Sergei Lavrov has also said that Russia’s demands are a “package” and that no progress can be made in talks on the other points in the MFA list – where there is much common ground, admit both sides – unless the West is prepared to concede on the key point of no Nato membership for Ukraine.

One possible way out of the crisis is if Ukraine declares itself a neutral country, also described as the “Finlandisation” of the country, in a similar deal struck with Finland during the Cold War.

While no Nato membership has been formally offered to Ukraine, the “Budapest memorandum” signed in 1994 does say that both Ukraine and Georgia could eventually be admitted to the organisation. Russia also  signed this document.

Subsequently Ukraine has changed its constitution that now includes an aspiration to join Nato as a national goal.

However, in a radical change of policy Prystaiko suggested that Ukraine may drop this aspiration to avoid a massively destructive conflict with Russia.

Ukraine could drop its bid to join Nato to avoid war, the BBC quoted the country's ambassador to Britain as saying, in what would amount to a major concession to Moscow in response to the build-up of Russian troops on its borders.

Prystaiko told the BBC Ukraine was willing to be "flexible" continuing by saying:  "We might - especially being threatened like that, blackmailed by that, and pushed to it," Prystaiko was quoted as saying when asked if Kyiv could change its position on Nato membership.

“This is big. Ukraine ratified a constitutional amendment in 2019 committing to a NATO and EU membership,” David Saveliev, an academic with the Oxford School of Global and Area Studies who specialises in Russia, said in a tweet.

Ukrainians attitude has changed over the years. In the first decade following the break up of the USSR most of those in eastern Europe remained wary which they considered an enemy during Soviet times.

“Since 1991, Ukrainians were apathetic at best towards NATO. This changed after the Russian intervention, of course, but the country is still split on whether to join the alliance,” said Saveliev.

Those attitudes began to change rapidly after the 2014 annexation of the Crimea by Russia and the start of the undeclared war in the Donbas in 2015.

However, even today Nato membership remains problematic as the country remains very divided, roughly into east and west, where the Russiaphiles in the East want better relations with Moscow as well as good relations with the EU.

“While #Nato membership is seen by many in #Kyiv as the best possible scenario, there is a great number of Ukrainians who want a good relationship with Russia because of close cultural and kin ties,” said Saveliev, citing a recent poll.

While tensions are running very high after Sullivan’s briefing and several western embassies have begun to pull staff out of Kyiv and recommended their nationals leave the country few experts believe an invasion is imminent while the diplomatic talks are ongoing.

Melinda Hardy, a senior expert with the Nato-funded Atlantic Council and a well known Russia hawk, came in for widespread criticism over the weekend when she predicted that Putin would invade Ukraine this weekend.

The British press were also hamming up war fears with the Daily Mail running a front page saying: “Frantic 48 hours to save Europe from war.”

As the invasion failed to happen, the new date circulating on social media is that the war will now start on February 16, after Scholz leaves Moscow.

Experts think that date is unlikely too while the diplomatic process is on going. Macron has managed to rekindle the Normandy Four talks on the implementation of the Minsk II agreements, and Scholz is also expected to push for a continuation of this process as one of the ways that this crisis could end: if the Minsk II agreement is completed then it gives the Kremlin a de facto veto over Ukraine’s membership of Nato thanks to the autonomy granted to the Donbas as part of the deal, which is already effectively controlled by Moscow as half the local population is already Russian passport holders.