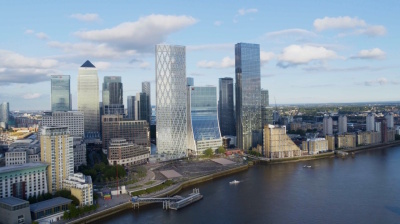 Ukraine may suffer one of the worst falls in GDP after a war, the European Bank for Reconstruction and Development (EBRD) predicts in its 2022/23 Transition Report.

In an analysis of the economic damage after wars, the development bank estimated that in half of the countries growth was still below the trend rate in comparator economies 25 years later. Projections indicate that the contraction in Ukraine’s GDP will be among the worst 10-20% of the conflicts in the last 200 years, it says.

In its economic forecast in September, the bank forecast that Ukraine’s GDP will fall 30% this year but will start to recover by growing by 8% in 2023. The World Bank last month predicted a 35% fall in GDP this year. The EBRD will make its next forecast in February.

“The big threat to the [September] forecast is the destruction of infrastructure in Ukraine due to shelling by Russia,” chief economist Beata Javorcik told bne IntelliNews in an interview.

She argued it was imperative for the international community to help Ukraine now, to encourage its people to stay in the country and to give refugees a reason to return. Ukraine has the highest number of internally displaced people in the world.

“While most of the discussion on reconstruction of Ukraine focuses on rebuilding the capital stock, it is equally important to ensure that Ukraine will keep the human capital it has, because human capital will be equally important during the reconstruction phase,” Javorcik said. “That's why it is very important to help Ukraine now both in terms of budget support as well as urgent repairs so that people who are currently in Ukraine can stay there.”

The EBRD has extended around €1bn this year to Ukraine and has committed to spend up to €3bn in total for this year and 2023.

According to the World Bank, Ukraine's recovery and reconstruction needs total at least $349bn, which is more than 1.5 times the size of Ukraine’s pre-war economy in 2021.

Nor can Ukraine expect much foreign investment at the moment,  Philip Bennett, former EBRD vice-president, told a panel discussion on the report at the EBRD's new headquarters at Canary Wharf. The "extreme uncertainty for investors" in Ukraine meant that "foreign direct investment is not going to be easy to come by", he said.

There were also signals, he said, that the post-war administration would not prioritise reform. "Ukraine is not going to be an easy counterparty to return to the reform orientation that we all want."

“This is an unpleasant recession but it's still manageable,” Javorcik said, pointing out that it was less than some Western European economies contracted during the worst of the coronavirus (COVID-19) pandemic.

“The initial expectations that sanctions would result in a financial and economic crisis were not realistic,” she said.

Import substitution, which has boosted domestic output, as well as intermediated trade by surrounding countries, had helped cushion the blow.

However, she argued that sanctions were still severely hitting the economy. “Where you see sanctions working is in the fact that there is a bigger decline in manufacturing output in industries that rely on imported inputs than in manufacturing as a whole,” she said.

The lower inflow of knowledge,  technology, components and capital following the exit of many multinational companies would also have long-term implications.

“The presence of multinational companies does not just benefit a country at the moment of entry. It is the constant flow of knowledge from services that make foreign affiliates more competitive,” Javorcik said. “This is something that you can’t see yet but [it] will definitely affect medium and long-term growth prospects.”

Russia's prospects are also being damaged by the huge outflow of mostly young, often high-skilled migrants to neighbouring countries such as Armenia, Georgia, the Baltic states and Central Asia.

Some economies in the Caucasus experienced double-digit growth in the first half of the year from this inflow of capital and people, Javorcik said, as well as the intermediation trade between Russia and the rest of the world.

Central Europe has also benefited from the inflow of refugees, this time from Ukraine, particularly because of the poor demographics in the region. According to the Transition Report, this inflow could increase the EU’s labour force by 0.5% by the end of 2022, twice the impact of the flow of migrants across the bloc’s southern borders in 2015-16.

Javorcik, who is Polish, said her country had seen a tangible increase in inflows of social security payments. “Certainly countries with adverse demographic trends can benefit from this inflow of people.

“People who leave their counties are ‘positively self-selected’ as economists would say,” she said. “On average they tend to be younger, better educated, more entrepreneurial. And in that sense they provide a benefit to their recipient countries.”

However, the EBRD’s forecast for Central European growth might have to be revised because of the worsening of the energy crisis caused by Russian restrictions on gas flows westwards and the bloc’s tightening of sanctions.

“Our baseline scenario was assuming still some flows of gas from Russia,” Javorcik said. "We are moving now to a more pessimistic scenario of essentially there being no gas exports from Russia. That would mean in aggregate for our region the forecast going down by more than one percentage point.”

Moreover, convergence with the level of Western Europe’s economies has virtually stopped, and the region also lags behind in preparing for the transition to a sustainable green economy.

“Since the start of the pandemic, convergence has largely stalled in all areas,” the report finds, and there is “considerable divergence [from Western Europe] in the area of green reform” which should be the foundation of future prosperity.

"Attitudes to reform have become much more negative in East European countries," Javorcik told the panel discussion on the report. She warned that the way some states and banks were keeping "zombie" firms alive was hurting banks’ profitability, damaging healthy firms, wasting budget money, and lowering long-term growth prospects.

In the medium term, Central Europe might still benefit from the rethinking of global supply chains after the pandemic – which interrupted supplies most notably from China – and now the war in Ukraine, which has cut off many inputs from Russia and Ukraine.

“The war in Ukraine and Russia’s weaponising of energy supplies and raw materials have provided further impetus for the rethinking of supply chains,” Javorcik wrote in the introduction of the Transition Report.

The EBRD chief economist told bne IntelliNews that the reorganising of global value chains had started. “The war in Ukraine has become a trigger for action on global value chains,” she said. “The war made it clear that geopolitical shocks are not going away and that therefore disruptions will continue.”

A survey the EBRD conducted with the German think-tank ifo found that more than three quarters of German companies in global supply chains have implemented at least one measure to improve the resilience of their supply chains – 55% of those surveyed had increased stocks, while 49% had diversified suppliers. Nevertheless, China has not necessarily suffered from this so far – imports from China have recovered quickly since the worst of the pandemic and have remained stable since.

According to the survey, Central European suppliers are seen as more reliable than those from South East Asia and China and could therefore potentially benefit from nearshoring or “friendshoring”, as multinationals seek supplies from nearer countries or those that share Western values. Already in Hungary and Slovakia more than 35% of output comes from work for global supply chains.