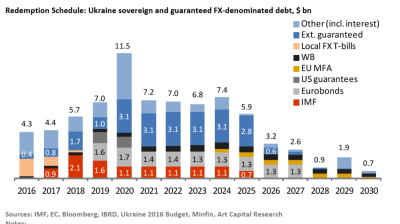 Ukraine faces a two-year debt payment mountain of $17bn in 2019-2020 as the restructured debt deal expires in the next two years, according to a report from the National Bank of Ukraine (NBU) released on December 18.

The amount of debt coming due is equivalent to the country’s entire hard currency reserves, which stood at $17.7bn in November.

Ukraine’s debt payments have been rising. The country had some $3bn of sovereign external debt to repay this autumn and is counting on a disbursement of circa $1bn-$2bn from its main donor, the International Monetary Fund (IMF) before the end of the year to cover its obligations. A new $3.9bn Stand By Agreement (SBA) was agreed with the IMF in October. The board of the multilateral lender is due to meet this week to finalise the deal, but that is now seen as a formality and the release of the next tranche is expect to follow shortly afterwards.

Next year the bonds restructured by former finance minister Natalie Jaresko and delayed by five years start to come due. External debt repayments on sovereign external debt will rise to $6bn in 2019 and to $15bn if commercial debt is included, according to Finance Minister Oksana Markarova. The repayments of sovereign debt due in 2020 rise again to circa $11bn.

The new IMF deal will release several billion more in funding from other international financial institutions (IFIs), including the World Bank and the EU, which have tied their credits to a successful implementation of a new IMF programme. But even with this extra IFI help Ukraine will have to return to the international capital market in the next two years to refinance a large part of this debt.

Raising money in 2019 is likely to be difficult in the first half of the year due to the presidential elections, the first round of which are slated for March 31, but are almost certain to immediately followed by a second round, which has provisionally been scheduled to happen on April 21.

The government has already covered most of its debt funding needs through to the end of the first half of 2019 with a  $2bn Eurobond in October that was issued days after the new IMF deal was announced. This bond together with the IFI money, and maybe another benchmark sized Eurobond issue, should be enough to cover the funding needs in 2019.

The government itself is upbeat on the funding needs for 2019, suggesting it could avoid another bond issue in 2019 altogether if it manages to raise enough concessional financing, Yuriy Butsa, Ukraine’s government commissioner for public debt management told Reuters on December 6. However, 2020 will be tougher and Ukraine will almost certainly have to return to the bond markets, cap in hand.

But the IFIs remain key to the country if it is to get through the next two years. The National Bank of Ukraine reiterated the only way to avoid default is to stick to the IMF programme. 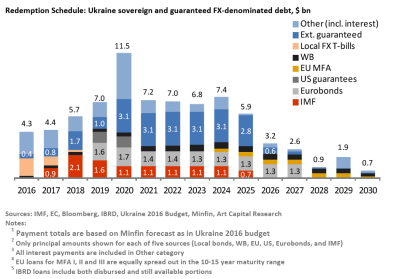