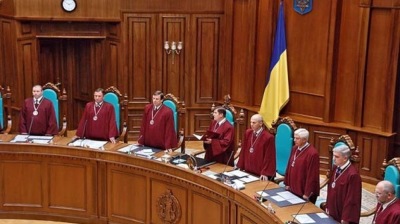 The Constitutional Court of Ukraine has started hearings on a lawsuit challenging the nation's President Volodymyr Zelenskiy’s decision to dissolve the Rada
By bne IntelliNews June 12, 2019

The Constitutional Court of Ukraine has started hearings on a lawsuit challenging the nation's President Volodymyr Zelenskiy’s decree on the nation's parliament's dissolution and his call for early parliamentary elections.

On June 11, the court begun public hearings of the case on a constitutional motion submitted by 62 lawmakers regarding the constitutionality of a presidential decree on the early termination of the powers of the nation's parliament, the Verkhovna Rada and the calling of early parliamentary elections.

Zelenskiy dramatically used his inauguration speech to dissolve parliament and elections are now slated to happen on July 21. However, it is not entirely clear if the new president has the authority to dissolve the Rada and his decision has been contested by several deputies.

Zelenskiy wants to hold snap elections to capitalise on his landslide victory in the presidential elections, which he hopes will carry through to the general election. Zelenskiy is on course to repeat his landslide victory in the parliamentary elections as his party Servant of the People currently commands a 48% in the opinion polls, which would make it the dominant force in the new parliament.

Zelenskiy's representative to the Constitutional Court Fedir Venislavsky believes that the ruling on the decision to dissolve the Rada will appear in less than 30 days. "The law on the Constitutional Court gives a month to make a decision on this issue. That is, we can predict that no later than June 29, there should be a court decision, but we expect it faster. We are not interested in delaying the process in any way," Venislavsky said on June 11.

He added that "there are no grounds for declaring the president's decree unconstitutional".

On May 24, Andriy Teteruk, first deputy head of the People's Front parliamentary faction, said that a group of lawmakers have submitted to the Constitutional Court a petition to verify whether the presidential move to announce the snap elections complies with the country's constitution.

"We view the president's decree as a direct and clear violation of the principle of the rule of law entrenched in the Constitution," Teteruk said. According to him, the former ruling coalition was established in accordance with legislation and ceased to exist on May 17, 2019, when the withdrawal of the People's Front faction from the coalition was announced.

According to the faction's members, this day marks the beginning of the 30-day period to form a new parliamentary coalition.

On May 21, Zelenskiy signed a special decree on the early termination of the powers of the nation's parliament, the Verkhovna Rada, and called early elections on July 21.

During his swearing on May 20 the new president also urged lawmakers to adopt a number of urgent laws "within the next two months", specifically, on the abolition of parliamentary immunity, and on criminal liability for illegal enrichment. Now what constitutes a coalition is in dispute.

On May 22, the chairman of the nation's parliament's Andriy Parubiy said that following May 17's collapse