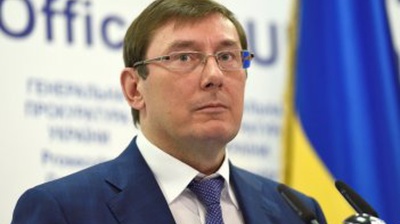 Ukrainian Prosecutor General Yuriy Lutsenko signed a letter of resignation on August 29, as the nation's newly elected parliament, the Verkhovna Rada, meets for its first day of work.

The signing of the letter was broadcasted live the same day. The document was dated August 29, according t to local media.

Lutsenko was a close personal ally of former President Petro Poroshenko and much vilified by observers as he was seen as one of the main obstacles to pushing through Ukraine’s anti-corruption campaign, demanded by Ukraine’s donors.

Despite over 1,000 investigations by the newly formed anti-corruption body, the National Anti-Corruption Bureau of Ukraine (NABU), and several indictments of high ranking officials, no one of note was prosecuted or jailed by Lutsenko. His depature will be welcomed by Ukraine’s western allies.

The same day, Mykyta Poturayev, an MP from the ruling Servant of the People Party faction, told reporters that President Volodymyr Zelenskiy is going to propose appointing deputy head of the President's Office Ruslan Riaboshapka for the post of the country's Prosecutor General.

Earlier, Zelenskiy submitted a motion to the nation's parliament seeking to approve the dismissal of Lutsenko, however, MPs rejected it. Lutsenko is currently on official leave. In May, Lutsenko said he would remain in his post until after the early parliamentary elections, scheduled for July 21.

Zelenskiy is considering deputy head of his staff Ruslan Riaboshapka as one of the candidates for the position of the nation's Prosecutor General, the president told journalists on July 23.

In April 2016, Poroshenko officially dismissed Prosecutor General Viktor Shokin, who was forced to write a letter of resignation in February amid mounting pressure at home and abroad to replace him.

Shokin was appointed in February 2015 after his predecessor, Vitaly Yarema, resigned amid accusations that he had failed to investigate landmark crimes, including the murder of Euromaidan protesters in Kyiv and corruption schemes of ousted president Viktor Yanukovych and his allies. Similar claims followed Shokin.