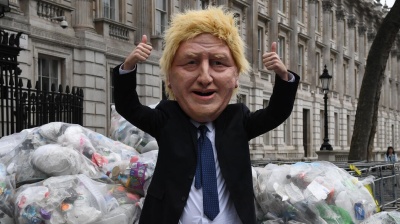 On July 13, Greenpeace UK dumped 625 kilograms of plastic waste at PM Boris Johnson’s ‘gate’ in Downing Street. 625kg is the volume the UK exports every 30 seconds. A figure of Johnson was placed at the scene where a "Stop plastic exports" tipper truck offloaded the waste.
By Akin Nazli in Belgrade July 18, 2021

Confirmation of a Turkish change of heart on accepting plastic waste exports was not yet available from the UK Department for Environment, Food and Rural Affairs (Defra) but it was potentially good news for the UK “recycling” industry, Simon Ellin, head of the UK Recycling Association remarked to Materials Recycling World (MRW), a UK-based sectoral publication, last week.

A UK Environment Agency spokesperson, meanwhile, informed MRW on July 14 that the agency was still liaising with the Turkish authorities to understand their plastic waste import restrictions.

“It is concerning that the Turkish government has succumbed to industry lobbying and has lifted its ban on plastic waste imports just days after it came into force. UK plastic sent to Turkey is being dumped and burned, with serious environmental and social consequences for local people,” Megan Randles, a political campaigner at Greenpeace UK, told the publication in turn.

Randles reiterated the Greenpeace appeal to the UK government to ban all plastic waste exports.

“[The U-turn] suggests that attempts by the Turkish plastics recyclers to show the economic damage being caused by banning these imports has won out over the environmental considerations,” REB Market Intelligence, another UK-based trade publication, noted on July 12.

The ban was imposed on May 18 but it had a 45-day grace period to July 2 for shipments that had received earlier permission.

Turkey is by far the largest destination for plastic waste from the UK, with up to 25,000 tonnes of monthly shipments.

The UK has exported more plastic waste to Turkey than any other country since China banned plastic waste imports in 2018. UK exports to the country increased from 12,000 tonnes in 2016 to 209,642 tonnes in 2020, equivalent to around 39% of the UK’s plastic waste exports.

Turkey accounted for 49% of plastic packaging waste exports in the first quarter of 2021.

“Bulgaria is concerned about becoming a replacement for Turkish imports, due to its close proximity and because some Turkish companies have looked to set up shop there,” he added.

On May 18, Ellin told MRW that some UK firms were exporting waste consignments to Turkey that fell into an illegal category.

Ellin also said that the UK Environment Agency was too under-resourced to take effective action and that Turkish authorities had turned a blind eye in some cases to material that was supposedly banned.

Other EU countries such as Germany, Belgium and Spain also dump their waste in Turkey, Ellin also noted.

Turkey is not only a dump for plastic waste; for instance, for more than a decade there have been media reports about an open nuclear waste dump on idled factor land in Izmir.

It should be noted that the dump is just a single case known to the public since it is visible.

Waste exporters in the UK are feeling the heat due to a recent campaign mounted by the Greenpeace UK.

Turkey is the largest destination for waste exported from the EU, with the volume weighing in at around 13.7mn tonnes in 2020, according to latest data from Eurostat.

In 2019, Turkey was again the top destination for waste exported from the EU, with 11.4mn tonnes.