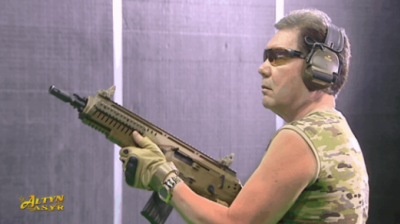 The news report suggested Berdimuhamedov is still very much an all-action president.
By Kanat Shaku in Almaty. August 6, 2019

Officials appear to be concerned that the speculation that autocrat Berdimuhamedov is deceased or is in poor health won’t go away. They say he is simply on vacation and the television report was billed as showing some moments from the 62-year-old’s holiday, due to end on August 15. The footage was seemingly fresh but Berdimuhamedov is never shown speaking into the camera and no evidence is offered that proves conclusively that the video was shot recently. That leaves the way open for those pushing the theory that Berdimuhamedov is no longer of this earth to say that the video could have been stitched together from older unreleased footage. As a dictator who relies on a personality cult, Berdimuhamedov is known for making bizarre videos depicting himself as, for instance, DJing, weight-lifting, singing songs he has penned or horse-riding.

He disappeared from public view in late July, prompting several foreign media outlets, citing unnamed sources, to report that he had died. The government of the gas-exporting Central Asian country responded with strenuous denials but observers said it was possible officials wanted to keep the death quiet while arrangements were put in place to ease the way to a chosen successor.

Adding to the feeling that officials' explanation of the present whereabouts of Berdimuhamedov do not add up, RFE/RL's Turkmen Service, known locally as Azatlyk, on August 6 noted that the president was wearing exactly the same suit and tie in Turkmen television coverage of his activities on July 24 as he wore in a May 10 broadcast on state television, "which is strange because he never wears the same suit - or even the same clothes - twice in his television appearances".

Failed to appear
The speculation surrounding Berdimuhamedov began back on July 6 after he failed to appear in public on that day and the previous day despite EU foreign policy chief Federica Mogherini being on a visit to Ashgabat. Officials’ denials that the president had passed away took on a new plausibility on July 24 when Uzbekistan’s presidential press service reported that Berdimuhamedov had called President Shavkat Mirziyoyev to wish him a happy birthday.