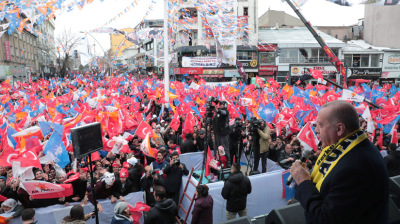 Veteran populist campaigner Erdogan has been rousing the crowds by saying Turkey will go after rogue bankers he blames for lira woes. He is pictured at a March 25 campaign rally in Agri, eastern Turkey. / Turkish Presidency.
By bne IntelliNews March 25, 2019