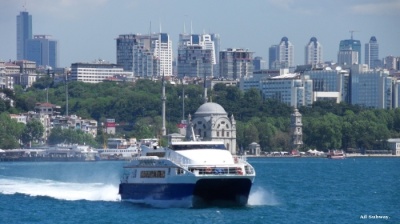 IDO Istanbul Fast Ferries Co., one of the world’s biggest ferry operators, is one of many substantial Turkish companies in talks with creditors to restructure debts.
By bne IntelliNews April 17, 2019

Turkey’s government seems to fail to appreciate that politics may eventually push the Turkish economy over a cliff-edge, a consulting fellow of Chatham House’s Europe Programme, Fadi Hakura, wrote on April 16.

Hakura observed: “According to IHS Markit, a London-based global information provider, the ‘degradation of institutional integrity, particularly relating to the central bank; high short-term external obligations in the private sector; low net reserves; and a paucity of portfolio capital investment inflows,’ will fuel the continued descent of the Turkish lira.

“This may trigger, should the current trajectory persist, a chain reaction of bankruptcies across a Turkish private sector owing over $200 billion dollars of foreign-currency denominated loans. In turn, Turkish banks and other financial institutions might witness a rapid capital quality downgrade and, thereby, trigger panic among the populace.

Under an alternative, and equally plausible scenario, the economy could face an ‘L-shaped’ glidepath as the lira settles down at a level commensurate with near-zero ‘recessionary’ growth rates for over a decade.” The latter scenario would entail prolonged stagnation whereby companies, financial institutions and consumers alike would constrain outlays for a long time to pay down debt piles within a sluggish economic environment, Hakura said.

Despite the damage the economic turmoil has wrought on his support among voters, Turkish President Recep Tayyip Erdogan “is refusing to accept the victory by the left-wing Republic Peoples’ Party (CHP) in Istanbul”, Hakura noted.

The Albayrak moves include the government issuing Turkish lira (TRY) 28bn ($4.9bn) of bonds and placing them at state banks. His other key proposal is to transfer non-performing real estate and energy sector loans via debt and equity swaps from banks to two funds managed by banks, and local and international investors.

“The [financial markets] perceived that Albayrak’s blueprint will neither resolve the foreign debt overhang shackling the private sector nor moderate spiralling inflation or arrest the devaluation of the Turkish lira,” Hakura continued. “Crucially, they are not convinced that it will rebalance the economy from its dependency on credit-fuelled consumption and debt-financed construction and infrastructure projects towards exports and private investment.”

Hakura concluded: “They saw this package as driven primarily by political expediency. Firstly, the cash infusion to the state banks could be designed to bolster their capacity to channel funds to the indebted private sector as they have become the main conduit for credit expansion in the economy.

“Secondly, the targeting of non-repayable loans in energy and real estate sectors is not coincidental. Turkey has awarded significant contracts to favoured allies in those sectors, who borrowed heavily in dollars and are now unable to repay.

“Notably, there is scant details on the two rescue funds; for example, on the price that will be set for the transferred assets and the amount of loss that will be incurred by the banks. Moreover, investors, whether foreign or domestic, will not be too interested in buying into the asset portfolios given the deteriorating investment climate in Turkey.

“Thirdly, the country’s leadership is wedded to promoting consumption and state-sponsored projects. That growth model is not only unsustainable but is also harming economic recovery and costing the treasury dearly. Since megaprojects such as the Osman Gazi bridge, are underperforming, the Turkish government has to compensate the contractors due to contractual revenue guarantees.

“No wonder that the de-facto dollarization is proceeding apace, which is a barometer of domestic confidence in the economy; the percentage of local foreign currency-denominated bank deposits rose from 28.5 per cent in 2011 to nearly 50 per cent of total deposits today despite lower withholding taxes on lira accounts.

“Financial markets are demanding visible policy changes by the government, which if not forthcoming, will engender greater political and economic volatility ahead. If this continues, more and more Turks also want their government to abandon business-as-usual to restore the economic fortunes of their nearly century-old republic.”