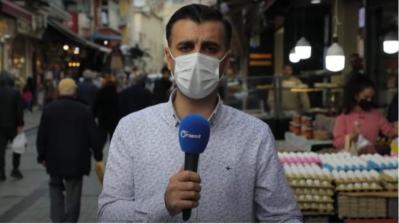 Majed Shamaa of Orient News has been sent to a repatriation centre near the Syrian border and may be deported. / Screenshot.
By bne IntelIiNews November 4, 2021

Social media posts have thrown up a series of arresting controversies in Turkey this week, with the hashtag #olmus (dead in Turkish) causing one particular dustup as 30 people were accused by the authorities of tweeting disinformation about the health of President Recep Tayyip Erdogan.

The authorities, meanwhile, are considering whether to deport a Syrian journalist over a humorous video in which he buys bananas in a clandestine manner and hides away to eat them without being seen, the point being that a row is raging in Turkey over a previous video released on social media in which a Turkish citizen is shown saying he cannot afford bananas, while Syrian migrants are buying them “by the kilogram”.

Not to miss out, the Israeli Embassy in Ankara has become embroiled in a row, denying it shared an Instagram post by a satirical website mocking the refusal of the US to provide Erdogan with F-35 fighter jets already paid for. Erdogan, saying he would settle for F-16s, recently said, “We’ll get our money back one way or another.” In its post, the website, Zaytung, makes out that Erdogan and Turkey are ready to settle for “$1.4bn worth of iPhone 13s and AirPods”.

Deleting the post after about half an hour, the Israeli embassy released a statement on its social media accounts, saying that it was targeted in a cyberattack. It expressed its regrets over the "inappropriate post."

In the case centred on the tweets about the president’s health, the authorities have opened a legal inquiry against the 30 accused people for posting "manipulative content".

The hashtag #olmus started trending amid growing speculation about Erdogan's well-being. Some rival politicians who oppose Erdogan's administration often question his health. Unsubstantiated rumours have been in circulation for years, but the speculation has intensified in recent weeks after several incidents, including one in which Erdogan briefly dozed off while speaking, and another, captured in video footage on October 29, where he is seen walking gingerly.

Reacting to the speculation about 67-year-old Erdogan—who had surgery on his lower intestine in 2011 but has since several times denied reports he had cancer—officials from his ruling Justice and Development Party (AKP) posted about him going about his official activities. Last time there was such speculation, during October, the president’s communications office shared a video of him playing basketball.

The controversy over who can and cannot affort to eat bananas in Turkey was sparked late last month when some Syrians shared footage of themselves eating the fruit. The videos outraged many Turks, who are presently suffering punishing food inflation, prompting authorities to detain foreign nationals over "provocative posts". The Immigration Directorate said those detained would be deported.

The journalist who shot the video in which he buys and eats bananas in a secretive manner, Majed Shamaa, who works for Orient News, has been sent to a repatriation centre near the Syrian border after being questioned and released by a prosecutor in Istanbul at the weekend, Reuters reported.

His lawyer, Mehmet Ali Hartavi, told the news agency that Shamaa, who has lived in Turkey for seven years, had not intended to mock anyone and had wanted to address Syrians' problems in a humorous way.

"Believe me, Syrians are afraid when purchasing bananas or fruit. He touched on this bleeding wound," Hartavi was quoted as saying.

Shamaa fears being executed if sent back to areas controlled by Syrian President Bashar al-Assad's forces, since he has also made comical videos about Assad, Hartavi said.