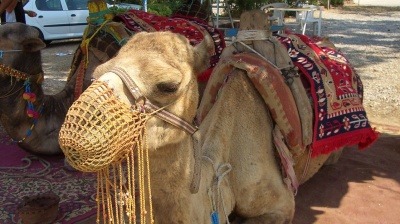 A camel available for tourist rides in Antalya.
By bne IntelliNews August 3, 2019

Turkey saw a 13% increase in foreign arrivals in the first half of this year, driving a 10% expansion in tourism revenue to $12.6bn, latest official figures show.

However, Turkish tourism businesses including hotels and travel agencies are discouraged by the prospect of a new levy to be introduced from October. To get back on track following a slump in visitors that occurred three years ago—caused by various factors including a series of terrorist attacks and a dispute with Russia over a shot down jet—many of the businesses had to bring in massive discounts. The levy will require the companies to pay up to 0.75% of their total revenues to Turkey’s newly founded Tourism Promotion and Development Agency and, given the significant effect it will have on profit margins, it will mark a step backward after the big effort to move forward.

Latest figures show the average spend per tourist in Turkey is still down by a third from its peak of $974 in 2013.

Muberra Eresin, head of the Hotel Association of Turkey, told Reuters that the fact that the levy would be calculated from total revenues meant even loss-making businesses would be forced to pay. “We have experienced a very difficult period in tourism and the sector is just getting on its feet again,” he was quoted as saying, adding: “The agency contribution poses a sustainability risk for businesses as it will not take into account a company’s profit or loss.”

The levy is expected by officials to raise around €150mn annually for the new tourism agency.

Travel agency Tigris Tourism chairman Davut Gunaydin told Reuters that the levy should have been taken from profits, or imposed at a much lower rate. “The ratio is very high to be taken from sales revenue, it should be around one third of that,” Gunaydin reportedly said.

Other tourism business owners have suggested the contribution should be taken from visitors, not businesses. That is the method used in destinations including Dubai and Spain.

The Turkish franchise of McDonald's is be sold by Turkey's Anadolu Group Holding. It said on January 30 that all shares of Anadolu Restoran, which includes the franchise, are to be purchased by ... more