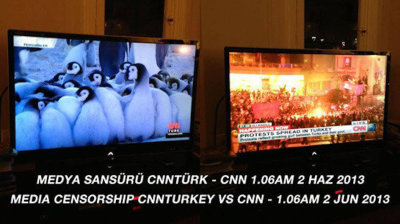 CNN Turk aired documentaries about penguins while CNN was airing live "Happening Now - Protests Spread in Turkey" during the Gezi protests of 2013.
By bne IntelliNews February 12, 2020

The main Turkish opposition party, the Republican People's Party (CHP), has decided to boycott CNN Turk and call on people to not watch the channel, alleging that it has an intolerable pro-government bias.

No CHP member or executive will participate in programmes on the channel, CHP deputy chair Tuncay Ozkan has announced, bianet reported.

Dogan Media Group, which launched CNN Turk in 1999, was sold to the pro-Erdogan administration Demiroren Group in early 2018. At the time of the sale of the media assets—which included the respected Hurriyet daily—Dogan was the largest media conglomerate in Turkey. It is widely accepted that almost all of Turkey’s media produces output biased in favour of President Recep Tayyip Erdogan.

"For protection against the damage of this channel, we advise our citizens not to watch CNN Turk broadcasts and make their children not watch it," Ozkan added.

Following the demonstrations, Bloomberg quoted CNN as saying: “CNN Turk is an independent channel, which licenses the CNN brand, but as part of this agreement must also adhere to CNN’s standards. CNN Turk has provided assurances and evidence that they are making every effort to provide balanced coverage of the Turkish elections. We are in regular contact with CNN Turk regarding output and editorial practices.”

The sale of Dogan Media Group to Demiroren drew sharp rebukes when it went through two years ago. “With this huge takeover, including Hurriyet, Turkish mass media industry comes under the direct political control of President Erdogan,” Kadri Gursel, a veteran journalist who had lately been released from prison pending trial over his work, tweeted at the time.

The deal marks an “increasing monopolisation of opinion”, Andrew Finkel, a veteran Turkey commentator and the author of “Turkey: What Everyone Needs to Know”, told Reuters as the transaction moved forward. “It is the end of an era. Dogan tried to do this balancing act of being sort of oppositional but not so much that the government would interfere.”

Dogan Holding’s media arm and its octogenarian founder, Aydin Dogan, were long seen as part of Turkey’s secular establishment. Erdogan repeatedly accused the company of bias against his Islamist-rooted ruling AKP. In 2009, some companies in the media division were hit with huge tax fines, which Aydin Dogan indicated were politically motivated. The tax bill forced him into selling Milliyet and Vatan newspapers to Demiroren.

Following the deal, analysts told left-wing Birgun newspaper that some 21 of Turkey’s 29 daily newspapers were under the control of companies that back Erdogan. They assessed that 90% of Turkey’s newspaper circulation would be pro-government.

Turkey, run under a state of emergency for two years following the failed coup of July 2016, became the world’s biggest jailer of journalists. Some latest rankings now place it second behind China.

The Bucharest Stock Exchange was upgraded by FTSE Russell to the emerging market category and is pursuing a similar upgrade from MSCI.