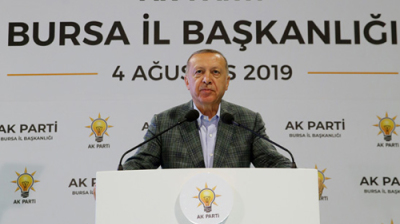 Critics say Erdogan is now de facto at the wheel when it comes to Turkey's monetary policy and he's in no mood to budge.
By bne IntelliNews August 6, 2019

The Turkish lira has become the Teflon lira of late with nothing knocking it off a surge up the tracks. Not geopolitical and defence rows with the US—Donald Trump has proved a handy pal with his great reluctance to hit the Erdogan administration with sanctions—and not President Recep Tayyip Erdogan’s July firing of the central bank governor by presidential decree, leaving the idea that the national lender still retains monetary policy independence as for the birds.

The debate as to how unreliable Turkey’s inflation figures have become in the hands of pressured officials and just how much manipulation of the Turkish lira (TRY) is taking place behind the scenes on the instruction of the Treasury goes on. But in the meantime, since May when it hit an eight-month low, the lira got lucky. By the morning of August 7, it had climbed more than 10% from that trough to better than 5.49 against the USD.

The currency became a fortunate beneficiary of the US Federal Reserve’s decision to switch to easing, something which proved a shot in the arm to emerging markets, especially Turkey with its comparatively cheap assets. What’s more, if the US-China trade war continues to worsen, and Beijing’s devaluation of the yuan triggers the Fed into weakening the dollar even more, the lira could be given another boost.

Erdogan’s under pressure. Turkey’s $766bn economy—expected to contract this year—got hit by a bitter recession in the wake of the currency crisis of last summer and then the president, a strongman once thought just about invincible, saw his man lose the Istanbul election as well as the controversial ‘revote’ that followed. But the lira is way out ahead of any other emerging currency so far this quarter. And Turkey’s bond returns have been transformed. They were among the worst earlier this year, now they are among the best. If the economy really can be set right on an acceptable timescale, Erdogan himself could be getting a new lease of life.

“People are piling into the lira,” Cristian Maggio, head of emerging markets strategy at TD Securities, told Reuters. “The main factor is external and the Fed being on a path of monetary easing ... and Turkey stands out as the main beneficiary of that.”

Looking at bonds, since the Erdogan revote loss on June 23, Turkish bonds have returned 4.2%, the second best in JP Morgan's EMBI emerging markets index. Capital flows have also turned around, with $3bn arriving in June, according to the Institute of International Finance (IIF).

Turks, however, are not yet buying the recovery story.

A year-long trend of “dollarisation” has not abated, noted Reuters, with a near-record 53% of accounts holding foreign currencies in mid-July. Rating agency S&P, meanwhile, observed that just 11% of government bonds are now held by foreigners. “The fate of the Turkish lira relies far more on the sentiment of Turkish resident households,” it said.

What’s more, key drivers of the Turkish economy such as the construction and energy industries, are up to their necks in unrepayable debt. Finding a way out of the woods for these sectors is proving a mighty headache, with rows starting to kindle over how much of a bailout the private sector should be entitled to expect from the government.

DATACRUNCH: the bne car ownership/age index
ISTANBUL BLOG: Meet “The Botox”, the mafia boss who’s singing like a canary about the Erdogan regime on YouTube
LONG READ: The first thing the emerging middle classes of New Europe do is buy a better car