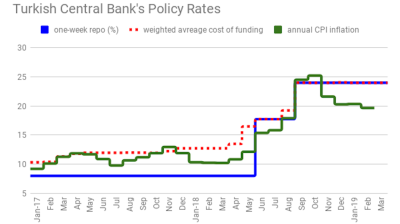 Turkey’s central bank kept its benchmark interest rate unchanged at 24% on March 6 as expected. The rate-setters also stated that monetary policy would be tightened further if it became necessary, assuaging investor concern that it could be loosened prematurely in the wake of inflation dropping from a 15-year high.

The one-week repo rate which serves as the regulator’s benchmark was raised 11.25 percentage points last year after the monetary policy committee (MPC)—at that point seen as losing its independence as it came under clear political pressure from the Erdogan administration to provide cheaper money—responded tardily to Turkey’s lira crisis. However, in a Reuters poll taken prior to the latest rates decision all 17 surveyed economists said they expected the present rate to be kept steady, even with the local elections due on March 31 and Turks experiencing severe economic pressure amid the fallout from the currency crash.

“The Committee has decided to maintain the tight monetary policy stance until the inflation outlook displays a significant improvement,” the MPC said in a statement. “If needed, further monetary tightening will be delivered.”

The Central Bank of the Republic of Turkey (CBRT) had already said last month that it would maintain its tight stance until it witnessed a “convincing improvement” in inflation.

Most analysts forecast that the MPC will start easing at its June meeting.

“Hold is hawkish”
Timothy Ash, BlueBay Asset Management’s senior emerging markets sovereign strategist, tweeted after some lira weakening: “TRY has been weak after this CBRT rate decision. Not sure what people were expecting, but a hold is a hawkish move. Perhaps with CBRT decision out of the way, people begin to worry about local election result.”

Amid Turkey’s economic woe, the local polls could prove turbulent with the ruling populist AKP party facing an uphill battle to maintain control of big cities including Istanbul and Ankara despite the severe downturn.

One Twitter user, Serdar Chard, responded to Ash: “Hard to determine the isolated effect on exchange rates when more than one factor were clearly present... Also interest rates for local bonds and time deposits are much lower, and lost correlation with CBRT funding, hence the attitude of local investors buying more fx.”

Another, Erol Dilmen, commenting in the wake of the top US general in Europe on March 5 telling the US Senate that he would advise that Washington does not permit the sale of Lockheed Martin Corp F-35 stealth jets to Nato ally Turkey if Ankara does not cancel plans to buy the S-400 advanced missile defence system from Russia, tweeted: “Conflict between [Turkey and] US [because] of S400s will be a major issue soon. Also CBRT will most probably lower rates after elections. Bank credit rates are much lower right now.”

Later on March 6, Turkish Foreign Minister Mevlut Cavusoglu was quoted as saying by Hurriyet that Turkey’s allies should not intervene with Ankara’s purchase of defence systems from non-Nato countries because Turkey has rejected proposals to purchase the military hardware from them.

Senior emerging markets economist Jason Tuvey at Capital Economics is one of the analysts who expects the central bank to refrain from cutting rates until June. “By that point, inflation should be falling a lot quicker and the economy will still be struggling quite badly at that point too,” he said. “So we think they’ll step up and support them.”

The median estimate in a Reuters poll showed Turkey’s economy contracting 2.7% in the fourth quarter of 2018. Analysts also expect it to contract in the first two quarters of 2019, bringing about a recession before a return to growth.

Inflation dropped slightly below 20% in February, down from the 15-year peak of 25.24% that came in October two month after the worst of the currency crisis.

“Minor tweaks”
There were only minor tweaks in the March 6 MPC statement compared to the previous statement it put out in January.

Observing that the slight changes did not signal a meaningful shift in the CBRT’s assessment since January, chief economist for Turkey at ING, Muhammet Mercan, said in a note to investors: “So far, the central bank has shown no signs of complacency and has recently come up with strong wording, promising to maintain a policy that reduces inflation to single digits in the least possible time.

“This stance shows the Bank’s sensitivity to ongoing inflation challenges with continuing upside risks, due to deteriorating expectations and a fragile outlook for the lira, given geopolitical issues and the upcoming elections.”

The median estimate in a Reuters poll has economists forecasting that the central bank will cut the benchmark by a total of 500 bp by the end of this year.