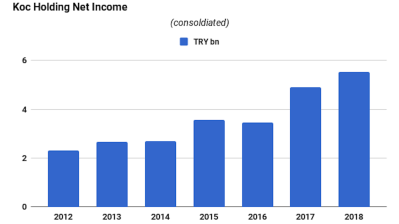 Largest Turkish conglomerate Koc Holding has sold $750mn worth of eurobonds due March 2025 at a yield to maturity of 6.625%, its holding company said on March 6 in a stock market filing.

On February 28, Koc Holding said in a bourse filing that it had mandated BofA Merrill Lynch, Citigroup Global Markets and JP Morgan Securities to arrange a series of investor meetings in Europe and the US, to start from March 1, for a eurobond issue worth up to $1bn.

Koc was seeking to sell 5- or 7-year dollar RegS/144A benchmarks, Global Capital reported on February 28. An unnamed EM investor told the publication that given recent Turkey volatility, he would want to see a much larger premium over the Turkey curve for the longer of those two options.

On March 5, Reuters reported that Koc had launched the bookbuilding and the initial price guidance was at 6.875%-7%.

While market participants told Global Capital on March 5 that the initial price thoughts looked generous, they expected the spread to be tightened aggressively before pricing.

On March 1, Reuters reported Turkish private lender QNB Finansbank had sold $500mn worth of 5.5-year USD eurobonds at a final yield of 6.95%.

In December, the Turkish finance ministry permitted private pension companies to allocate up to 30% of state-contribution funds to investments in asset-backed securities, but only those approved and graded by the Capital Markets Board of Turkey (SPK),

Norway’s Government Pension Fund Global had $48mn worth of Vakifbank securitised bonds in its portfolio as of end-2018, Norges Bank said on February 27.

In December, Turkiye Kalkinma Bankasi completed the issuance of TRY3.15bn (€521mn) worth of asset-backed paper based on mortgage-backed securities to be issued by Ziraat Bankasi, Halkbank and Vakifbank and Garanti Bankasi.

Akbank has received regulatory approval from the Capital Markets Board of Turkey (SPK) to issue up to TRY1.5bn (€247mn) worth of mortgage-backed securities abroad, according to an SPK bulletin released on December

Koc is the only Turkish company that made it on to the Fortune 500 list based on 2017 data while its combined revenues amounted to 7% of Turkey’s GDP, according to an investor presentation on the company’s website.

Koc Holding has the sixth largest weighting, of 6.23%, in the iShares MSCI Turkey ETF.

Moody’s Investors Service has affirmed Koc Holding at Ba2/Negative while Standard & Poor’s has affirmed it at BB-/Stable, the conglomerate said on March 1 in a bourse filing. Both ratings are one notch above Turkey’s sovereign rating.

Meeting in New York
The Financial Times reported on January 20 that 30 investors, including portfolio managers and analysts from Goldman Sachs, Macquarie, and AllianceBernstein, met with executives of Turkey’s Akbank, Koc Holding and Mavi Jeans in New York to discuss the prospect of a Turkish turnaround.

On March 5, Koc’s LPG distribution unit Aygaz said in a stock market filing that it was establishing a 50-50 JV with Bangladesh-based United LPG Ltd.

According to a research note on the Turkish energy industry published on February 20, VTB lowered its 12-month target price for Aygaz (Hold) to TRY12.3.

Aygaz has a 0.38% weighting in the iShares MSCI Turkey ETF.

Norway’s Government Pension Fund Global had a 0.99% stake in Aygaz as of end-2018, Norges Bank said on February 27.

On January 15, lender Yapi Kredi said in a bourse filing that its shareholders Koc Holding and UniCredit had each bought $200mn worth of its subordinated bonds.

Yapi Kredi’s bonds pay a 13.875% yield to investors across the first five years. They will be subject to value reduction if the core capital adequacy ratio falls below 5.125%, the statement added.

On January 30, Turkey’s leading appliance maker Arcelik, owned by Koc Holding, said in a bourse filing that its net income rose by 1% y/y to TRY856mn versus revenue growth of 29% y/y to TRY27bn.