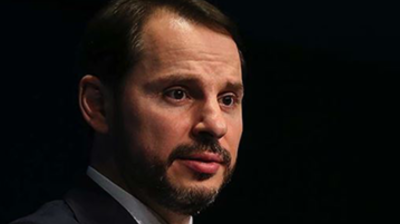 Albayrak's resignation came as a shock to the markets as did Erdogan's firing of the central bank governor the previous day.
By bne IntelIiNews November 8, 2020

The crisis-stricken Turkish lira (TRY) prior to the weekend slid to its latest all-time low of 8.59 to the dollar taking its losses to around 50% in two years as officials struggled to convince the markets that they in any shape or form have a realistic plan to stop Turkey falling into an outright balance of payments crisis and the election of Joe Biden to the US presidency—unlike incumbent Donald Trump, Biden is not expected to turn a blind eye to some of Erdogan’s more aggressive policies and could advance sanctions, having described him as an “autocrat”—added to the pressure on Ankara.

Turkey’s finance ministry confirmed to news agencies that a post on the official Instagram account of Albayrak, a 42-year-old son-in-law of Erdogan, announcing his resignation for health reasons was genuine.

“I decided not to continue my duty as a minister after five years in office due to health reasons,” Albayrak, who was minister of energy before taking the top economy post in mid-2018, said in his statement. “I’ll spend my time with my mother, father, wife and kids, whom I have neglected for many years out of necessity.”

Middle East Eye reported sources as saying that Albayrak, who has deleted his Twitter account, might have resigned after Erdogan replaced the central bank governor without his knowledge.

The lira gained more than 1% in response to the Albayrak news, but it is not at all clear yet as to what Erdogan, who would need to approve the resignation, has in mind in terms of reshaped economic management.

Uysal—like his predecessor Murat Cetinkaya who was fired by Erdogan in July 2019, with the president expressing his displeasure at the lack of rate cuts to boost the economy—was sacked abruptly by a decree published in the Official Gazette. No explanation was provided. Naci Agbal, 52, who served as finance minister between 2015 and 2018, was appointed as the new central bank governor.

The most recent phase of Turkey’s economic management has largely seen the central bank attempting to introduce backdoor monetary tightening in an attempt at strengthening the lira without formally raising interest rates—Erdogan, known for his ‘Erdoganomics’, is famously averse to rate hikes and is widely viewed as being in charge of monetary policy. Prior to the backdoor efforts, the central bank wiped out almost all of Turkey’s FX reserves attempting to intervene in the currency markets to defend the lira.

New central bank boss Agbal “might do a better job in getting approval for a rate hike” given his former experience with the government and ruling party, Selva Demiralp, director of the Koc University-TUSIAD Economic Research Forum, told Reuters, adding: “Absent a rate hike, I am afraid the financial crisis will only get worse with the depreciation in the lira that increases the external debt, triggering bankruptcies.”

Turkey has more than $100bn of foreign debt that needs repaying in the near future.

At the last meeting of its monetary policy committee on October 22, the central bank bucked expectations for a substantial interest rate hike and held its policy rate steady at 10.25%, triggering sharp losses in the lira. The bank also surprised markets a month earlier when it hiked rates. 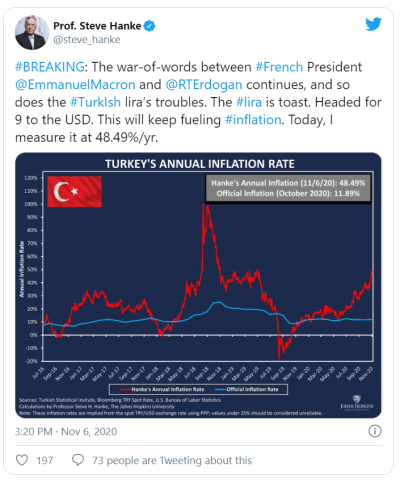 Turkey’s official annual inflation rate stands just under 12% but many sceptical analysts believe that in reality inflation is three to four times higher. Steve Hanke, an economist at Johns Hopkins University, tweeted on November 6 that his latest measure was 48.49%.

Mehmet Mus, the deputy parliamentary group chairman for the ruling AKP party, said Albayrak had taken important steps to strengthen the economy and that he hoped Erdogan would not accept the resignation.

“We personally witnessed his diligent work. If our president sees fit, I hope he continues at his post,” Mus said on Twitter.