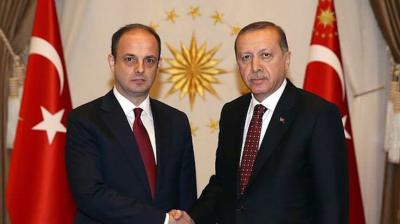 Turkey’s central bank has left its end-2019 consumer price index (CPI) inflation forecast unchanged at 14.6%. The national lender announced the decision on April 30 in its second inflation report for 2019.

Meanwhile, the regulator hiked its food inflation estimate for end-2019 to 16% from the previous 13%, while its average oil price estimate was revised up to $67.2 per barrel from $63.1, according to central bank governor Murat Cetinkaya’s briefing on the report.

Amid Turkey’s ongoing economic difficulties, unconventional moves in its economic policy and question marks over how official data is being compiled, it is quite possible for the headline inflation estimate to remain flat while the estimates for food inflation, which has the highest weight at around 25% in the inflation basket, and the oil price rise.

The central bank assumes that the recent trend in inflation—which stands just below 20%—along with tax cuts and administered prices will offset food inflation growth and the rising oil price.

The gap between the recent officially portrayed trend in inflation and reality on the ground is, however, growing while it seems that the central bank expects the government to keep tax relief measures on the table and anticipates that tax hikes on some products such as tobacco and alcohol will keep not show through as an increase in inflation. If consistency is not a concern, everything is possible.

The Turkish lira (TRY) has been hitting a newly installed glass ceiling, butting its head at just below the 5.97s to the USD since April 25.

Puzzling reserves volatility in spotlight
During a Q&A session with Centinkaya on April 30, attention predictably turned to the central bank’s promise to address puzzlement among investors and economists over unexplained volatility in the regulator’s international reserves amid the latest bout of TRY weakness. Cetinkaya is viewed as quite an amenable official, but critics say that his main shortcoming is that at the end of the day he is not a central banker. As tension rose during the putting of consecutive questions on the movements in the reserves—said to have been ‘enhanced’ with short-term swaps he failed to give a proper reaction, instead referring to a report to be released following the press briefing, which he said would provide detailed explanations.

“I’m none the wiser,” Inan Demir, an economist at Nomura International in London, said in a note. “I’m afraid in general the market was looking for—or hoping for—clarity on net reserves, but it didn’t get that.”

Shift in policy language queried
Cetinkaya was also asked about the recent shift in the tone of the central bank’s monetary policy committee (MPC) to less hawkish language.

“In the meeting, the governor clarified the CBT [Central Bank of Turkey] position following the unexpected revision in its policy guidance by dropping tightening bias in the April MPC meeting. This caused an interpretation that the move would lead to premature monetary easing. With the removal of the tightening bias the CBT sounds less hawkish in a backdrop of macro uncertainties and currency volatility with heightened risks of inflation,” Muhammet Mercan of ING Bank said in a research note entitled “Turkey’s central bank does not rule out tightening”.

“However, Governor Cetinkaya has not ruled out the possibility of additional tightening with further risks of inflation and downward pressures on the currency. That is the major reason for the CBT leaving inflation forecasts unchanged in the April report, as implied by the governor. So, given the still fragile currency, [Turkey’s] continued dependence on external financing and ongoing inflationary risks, the bank would likely remain tight for a long while,” Mercan added.

“It was overall dovish, relative to what the market needs, with the notable exception of that comment on potentially tightening rates in the future,” Cristian Maggio, the London-based head of emerging-market strategy at TD Securities, was quoted as saying by Bloomberg. “The real question is rather why did the MPC feel the urge to remove an explicit commitment to possibly doing so in the statement last week, to replace it with an ambiguous sentence?”

Questions were also presented to Cetinkaya on the state’s price controls and imposed deposit/lending rates. However, he did not address those queries as the space allocated for questions was not sufficient.

All in all, Turkish government officials have maintained a “take it or leave it” stance since the start of the pre-local-elections campaign in December. It is understandable that it is tough for some market players to struggle to acknowledge the loss of ‘favourite toy’ Turkey, but that’s the way it is.

Meanwhile, what the Turkish government is planning when it comes to its upcoming external debt repayments remains a mystery. Last year, there was insistence that interest rates would not be increased—then, at the ‘last moment’, the policy rate was hiked by a huge 625bp in one go in September. Turkey has around $177bn in short-term external debt coming due in the next 12 months.

After last week’s MPC statement, Goldman Sachs Group said the lira could depreciate 15% in the next 12 months. The TRY was the emerging world’s worst performer in April.

COMMENT: CEE Fintech Atlas: Some stagnation in the fintech scene, but new vibrant hotspots and opportunity to lift fintech partnership to the next level
Suma Chakrabati leaves the EBRD a greener bank
Russians, Serbians, Turks the biggest property buyers in Montenegro