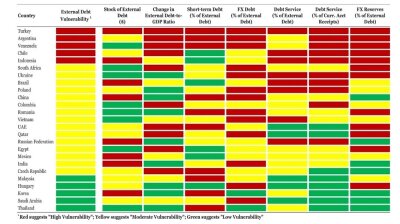 Turkey has experienced multiple large currency devaluations over the past few years and could be ripe for some type of external debt crisis as well, US-based investment bank Wells Fargo has concluded in a note to investors entitled “Which Economies Are Most Vulnerable?”

Wells Fargo examined 25 vulnerable economies against eight criteria—Turkey got the worst ranking, a “red”, suggesting “High vulnerability,” for all of them. The most serious challenger to Turkey’s rock bottom status was essentially bankrupted Argentina—its blushes were saved by two “yellows”, suggesting “Moderate vulnerability”, for Argentina’s external debt stock and debt service, with longer maturities on servicing the country’s external debt compared to Turkey.

Another essentially bankrupted country, Venezuela, was ranked third worst. It receive a “green” for “Low vulnerability” in external debt stock and a “yellow” in debt service.

On May 13, the Institute of International Finance’s (IIF’s) Global Debt Monitor report for May showed that Turkey’s real sector had an FX-denominated debt stock equal to 37% of the country’s GDP at end-Q1.

Only the real sectors of Hong Kong and Singapore had higher FX-debt stocks than the Turkish real sector.

The Turkish government’s FX-debt stood at 25% of GDP, with only Argentina and Ukraine facing a greater burden.

The Turkish financial sector’s FX-debt also equalled 25% of GDP, behind the percentages calculated for Singapore, Hong Kong and South Korea.

Turkish households have no FX-debt via the financial system.

Also, when it comes to Turkey, critics, including this publication, have cautioned beware “inventive” growth figures. Turkey’s rivals in this field include Argentina, but China is the indisputable leader here. Turkey in 2020 signalled that it might challenge China for this “anti-award”, but then stepped back.

The chart below was on May 11 shared by Turkey’s industry minister Mustafa Varank (@varank). It shows industrial production growth figures of the G-20 countries in Q1 2021.

On May 6, Turkey’s finance minister, Lutfi Elvan, said that Turkey may release an official GDP growth figure of 5.5-6% for Q1, a double-digit number for Q2 and a figure higher than 5% for 2021 as a whole.