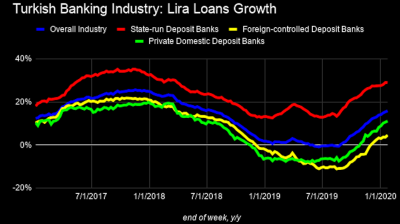 Turkey’s prescient president Recep Tayyip Erdogan (Erdoganomics is going to prove us all dead wrong) continues to barrel along like an unpinned grenade on all fronts but when, and in whose hands, he will explode over the Turks’ heads is the one-trillion-lira question.

Just one day after his MPs filed a draft law to expand the state credit guarantee fund (KGF)—Lawks-a-mercy! The biggest reason for Turkey’s 2018 crash was the ramping up of the KGF and the lousy lending that followed!—the central bank on February 19 cut its policy rate by a further 50bp to 10.75% (causing a further 0.4% depreciation in the wobbling lira) in line with both market expectations and trepidations. The rate stood as high as 24% only last July, when Erdogan fired the national lender’s governor because he wasn’t planning on cutting far enough, fast enough.

Jason Tuvey of Capital Economics reiterated Capital’s strong non-consensus call that Erdogan will have to hike policy rates in the second half of 2020 through to 12.50% by the end of the year (okay, he didn’t say Erdogan, but if we can just stress this one more time, in Turkey it’s the near all-powerful president who de facto runs monetary policy). However, if the lira crashes again, you may have to at least double Capital’s forecast. Not that 25% can save the lira like 24% did after the currency chaos of August 2018.

The consensus estimate for the benchmark at end-2020 stands at around 10%. There are always plenty of critics queuing up to blame the global finance industry for having myopia, but hey, you think they’re not able to forecast 10 months down the road in Turkey? Why back in June 2017 the masters of the universe bought $2.75bn worth of 100-year (yes, “one century”) bonds from Argentina. Less than a year later, the country was bankrupt.

Back in Ankara, Erdogan’s lawmakers (or law “breakers”, as in they make a habit of breaking perfectly good legislation to pieces) want to expand the Treasury guarantee pledge for lenders to Turkish lira (TRY) 35bn ($5.75bn) from TRY25bn.

Erdogan’s parliamentary caucus deputy chairman, Mehmet Mus, said on February 18 that the move would translate into TRY175bn worth of fresh loans for SMEs when leveraged across the banking industry while Reuters quoted an unnamed official as estimating the upcoming credit impulse at TRY150-175bn. He added that “the SMEs will lean on investments thanks to the fresh loans”.

The would-be sultan in his palace in Ankara lost his grip on reality a long time ago, or at least that’s the only conclusion one can draw from what he says in public. It is possible that Erdogan and his officials really believe that the loan stimuli will end in investments this time around, but it certainly wasn’t the case last time around.

The KGF was first deployed to stimulate the economy through the end of 2016 after the failed coup in July of that year that led to an economic downturn. Erdogan emerged from the turbulence laying down the law like never before. Such was the shot in the arm he ordered for the economy, it nearly blew the overheated limb off.

The initial TRY250bn worth of stimuli released to Turkey’s SMEs with KGF underpinning were partly responsible for pushing the lira out to an all-time low of 7.24 against the USD in August 2018.

Loan volumes under KGF guarantees rose to TRY372.5bn as of end-April 2019 from TRY317.3bn as of end-October 2018 while the figure stood at TRY394bn at end-2019, according to latest data available on the KGF’ body’s official website.

Lira loan growth reached 16% y/y as of February 7, the highest level recorded since July 2018. Annual lira loan growth hit 26% in November 2017 due to the credit guarantee fund commitment of TRY250bn.

Getting around banks that drag heels

So Erdogan’s economic masterminds plan to channel loans to the SMEs to get around banks that have dragged their heels in doing so (because they don’t want to lend to already bankrupted companies is the nervous plea here).

The government has delayed its guarantee payments for loans under the KGF in default but Turkish lenders have become Erdogan’s very own puppets, so there is plenty more to understand when it comes to grasping the debtors’ current situation.

bne IntelliNews has grown queasy from its endless attempts at relaying the shocking extent of the imbalances in Turkey’s economy and the imbroglio of national politics (including the undermining of the judiciary and the dismissiveness shown to civil society and rights) mixed with in-your-face geopolitics. Please check out our Turkey section if you are yet to hear how this is a country teetering on the edge of a precipice while Erdogan plots yet another pirouette. Watch this space for more. And make sure of keeping one eye on the jagged rocks below.