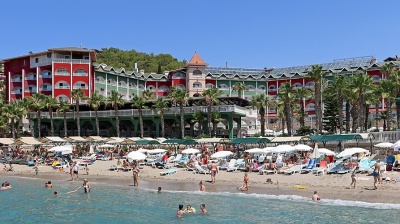 Turkey has not closed its airspace to Russia, clearing the way for a boom in Russian tourists who have few other holiday destination options. / Liilia Moroz cc-by-sa 4.0.
By bne IntelIiNews August 22, 2022

While much of Europe debates whether Russians should be forbidden from obtaining tourist visas, Turkey has been going all out to ensure Russians are not hindered from visiting its resorts despite the economic and political fallout from the Ukraine war.

The country has laid on charter flights at every turn and the strategy seems to be paying off—in the first seven months of this year, 2.197mn Russian citizens visited Turkey, marking an increase of 41.5% y/y, a source in the Turkish culture and tourism ministry informed TASS on August 22. The Russian Association of Tour Operators earlier said Russia’s tourist flow to Turkey might surpass last year’s level of 4.7mn visitors by the end of 2022.

Though a Nato member, Turkey has stuck to a neutral stance on the Ukraine war, declining to impose sanctions on Moscow, keeping its airspace open to Russian aircraft and even serving as a safe harbour for the superyachts of oligarchs including Roman Abramovich. The gains Turkey is securing out of the Ukraine crisis are, though, starting to seriously rankle with Western capitals—Turkish port warehouses are said to be packed with goods on their way to Russia and Turkey’s oil imports from Russia have doubled—but Ankara argues it has important reasons for staying on good terms with both Moscow and Kyiv. On the one hand, argue Turkish officials, Turkey, as a Black Sea neighbour of both Ukraine and Russia, needs to maintain relations with both the invader and the invaded so that it can serve as a trusted intermediary in any peace efforts that become possible, while on the other, the crisis-embroiled Turkish economy needs shielding where possible from trade and investment shocks stemming from the ongoing conflict.

Overall, Turkey's foreign visitor tally jumped 53% y/y to 6.67mn in July, exceeding pre-pandemic levels and putting the country on course to hit the government’s 2022 target of $37bn in tourism revenues.

The tourism ministry is targeting 47mn tourists in order to hit the revenue target.

"July figures were strong and so is August. When we look at the current bookings, number of flights and seats allocated by tour operators for September, October and November, it seems that the ministry's targets will be achieved," Bulent Bulbuloglu, vice chairman of the Turkish Hoteliers Federation (Turofed), told Reuters.

"Especially the number of Russians are increasing day by day. Now we have around 80 daily flights from Russia to Antalya and we know that that number will also go up," said Ulkay Atmaca, general manager of Innvista Hotels in Antalya's Belek was reported as saying by the news service.

The severely weakened lira—which lost 44% against the dollar last year and to date this year has lost another 27%—is a big attraction for tourists with hard currency and provides a major price advantage over rival destinations.

Looking at how the economic response of the West to Russia’s aggression in Ukraine has affected Russians’ foreign holiday habits, Bulbuloglu also reportedly said: "Wealthy Russians who used to travel to more expensive destinations such as Spain, France, Italy and Greece have also turned their faces to Turkey due to flight restrictions by Western countries."