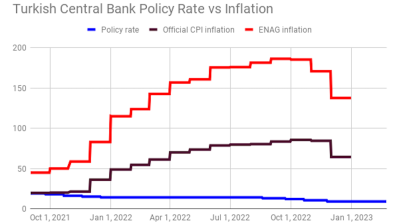 The Turkish central bank’s monetary policy committee (MPC) on January 19 left its policy rate at 9%, the authority said in a statement (chart). The 'hold' was expected by the market.

President Recep Tayyip Erdogan demanded a single-digit policy rate and it was delivered at 9% in November. The policy rate is set to stay there for the near future. Turkey’s MPC meetings have again turned into non-events.

In October, the central bank hiked its expectation for end-2023 official inflation to 22% (upper boundary: 27%) from the previous figure of 19% given in its July inflation report.

The guidance was based on the assumption that the Turkish lira (TRY) will not experience another crash. As of January 19, the USD/TRY pair was up 1% to TRY 18.8 from 18.6 on October 27.

If the USD/TRY remains stable, Turkey’s official inflation figure is set to decline to the 30-40%s across 2023.

The turbulence-free mood on the global market continues. Turkey’s five-year credit default swaps (CDS) remain below the 600-level, while the yield on the Turkish government’s 10-year eurobonds remains below the 10%-level.

Turkish minister tells US ambassador ‘Take your dirty hands off Turkey’ as sanctions sparks fly
Turkey accuses West of waging ‘psychological warfare’ to wreck its tourism industry
ISTANBUL BLOG: Erdogan’s talking rate cuts again. There are those who are bored stiff by these joke economics