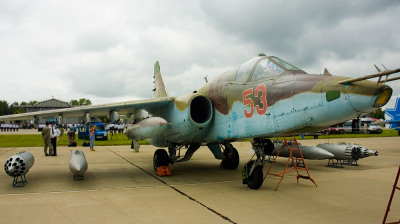 Turkey has denied that a Turkish F-16 fighter jet on September 29 shot down an Armenian Su-25 fighter plane over Armenia in what would be a major escalation of Armenia and Azerbaijan’s conflict over Nagorno-Karabakh that has raged for three days.

The claim was “absolutely untrue”, Turkey’s communications director Fahrettin Altun said, adding: “Armenia should withdraw from the territories under its occupation instead of resorting to cheap propaganda tricks.”

Azerbaijan also denied there had been any such shooting down and called on Armenia to provide material evidence.

Armenia's foreign ministry insisted the claimed shooting down was a fact and took place in its airspace.

Armenian Foreign Ministry spokeswoman Shushan Stepanyan said the Soviet-made SU-25 was shot down on the morning of September 29 and that the pilot "died heroically". In a Facebook post, she said the Turkish F-16 was 60km (37 miles) deep into Armenian airspace.

Armenia, like Russia—which has a military base in Armenia—is a member of the Collective Security Treaty Organization (CSTO) intergovernmental military alliance, along with Kazakhstan, Kyrgyzstan, Tajikistan and Uzbekistan. An attack on one member should mean the other members coming to its aid.

Since hostilities began, Russia has called for an immediate ceasefire. Reuters on September 29 prior to the claimed shooting down of the fighter jet reported the Kremlin as saying that Moscow was in constant contact with Turkey, Armenia and Azerbaijan over the conflict and that any talk of providing military support for the opposing sides would only add fuel to the fire.

The UN Security Council is expected to hold emergency talks later on September 29 to discuss the fighting.

With little heard from the US Trump administration as to its standpoint on the conflict, Joe Biden, who will challenge Donald Trump for the US presidency in an election just over a month from now, put out a statement reading: "With casualties rapidly mounting in and around Nagorno-Karabakh, the Trump Administration needs to call the leaders of Armenia and Azerbaijan immediately to de-escalate the situation. It must also demand others—like Turkey—stay out of this conflict."

German Chancellor Angela Merkel "urgently called for an immediate cease-fire and a return to the negotiating table" in phone calls with the leaders of Armenia and Azerbaijan, according to her spokesman. Steffen Seibert said Merkel spoke with Azerbaijani President Ilham Aliyev on September 29 and Armenian Prime Minister Nikol Pashinian the day before.

The fighting now appears to be spilling out of Nagorno-Karabakh, a mountainous enclave internationally recognised as part of Azerbaijan but controlled for the past three decades by ethnic Armenians as a self-proclaimed republic that Armenians refer to as Artsakh.

Early on September 29, the Armenian defence ministry said that Azerbaijani armed forces opened fire on an Armenian military unit in the border town of Vardenis, miles away from Nagorno-Karabakh. A civilian bus was set on fire after being hit by an Azerbaijani armed drone, it added in a statement.

Armenia also denied an earlier report by Azerbaijan’s defence ministry that the Armenian army had shelled the Dashkesan region on the border between the two countries.

Armenia and Azerbaijan both said that heavy fighting continued overnight in Nagorno-Karabakh itself. The self-proclaimed authorities in the enclave said 87 of their military personnel had been killed and 120 wounded in the fighting so far, Armenpress news agency reported. They estimated the number of deaths on the Azerbaijani side at nearly 400, also claiming that one Azerbaijani aircraft, four helicopters and a number of tanks had been destroyed.

Azerbaijan's defence ministry was quoted by news agencies as saying that Armenian troops had repeatedly attempted and failed to retake lost positions in the Fuzuli-Jabrayil and Aghdere-Terter areas. It added that a column of Armenian armoured and other combat vehicles had been destroyed, with the enemy suffering heavy losses.

None of the claims made by the opposing sides have been independently verified.

Ukraine will receive $5.5bn in support from the US later this month
2 hours ago
John Malkovich to turn Skopje into Hollywood of the Balkans
2 hours ago
Envoy says start made on construction of Turkish attack drone factory in Ukraine
11 hours ago
Huge explosion rocks Russian airbase on the Crimean peninsula
15 hours ago
Russia cuts oil flow via Ukraine's Druzhba pipeline, blaming sanctions for blocking transit payments
15 hours ago