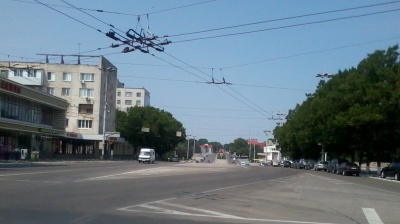 The authorities in Tiraspol warned of cuts to trolleybus services and hot water supplies, while industrial plants are idled. / Clare Nuttall
By Iulian Ernst in Bucharest November 3, 2022

The separatist republic of Transnistria in Moldova is “on the verge of a humanitarian crisis”, Sergey Obolonik, head of the Transnistrian Ministry of Economic Development, has claimed.

Moldova’s Moldovagaz restricted gas supplies to Transnistria after the separatist region suspended electricity supplies at the beginning of November. The amounts were cut to levels that would still cover the needs of the local population for electricity and heating, though.

Earlier, the region’s President Vadim Krasnoselsky said that he would approach Gazprom and the Russian authorities to step in and force Moldovagaz to transfer more gas. Transnistria’s power plants burn Russian gas, supplying both the separatist republic and the rest of Moldova.

However, Gazprom itself cut the volume of gas delivered to Moldovagaz to half the contracted amount, as of November 1. Moldova is therefore also facing an energy crisis, not least because it usually relies on electricity from Transnistria. Electricity prices have tripled since the beginning of the year as Chisinau has instead turned to more expensive imports from Romania. The authorities have also warned of blackouts.

In Transnistria, trolleybuses will run only during peak hours, and hot water will be delivered upon a strict hourly schedule in the morning and in the afternoon, Sergey Obolonik, head of the Transnistrian Ministry of Economic Development, announced. Only the heating for households will be supplied as usual.

“The volumes of gas that have been delivered to Pridnestrovie [Transnistria] since November 1 are not enough. They will be insufficient not only for industry but even for the population and social facilities. We are on the brink of a humanitarian crisis. There is no longer an energy contract, the largest gas consumers have been stopped, [steel mill] MMZ, [cement plant] RCC are idle, [textile factory] Tirotex, a brick factory and other enterprises will be stopped,” said Obolonik, quoted by TSV Pridnestrovie.

Such statements are visibly aimed at creating hostility among the residents of the separatist republic.

This is an unexpected change in the behaviour of the authorities in Transnistria, which have cooperated with Chisinau since the war in Ukraine started in February, and may be attributed to influence from Russia.

Separately, Moldova’s President Maia Sandu confirmed that there is clear evidence that the social unrest in Chisinau — officially organised by the Shor party and the Socialists — is in fact stimulated by the Russian intelligence services (FSB).