Tourists head off the beaten track in CEE and Eurasia 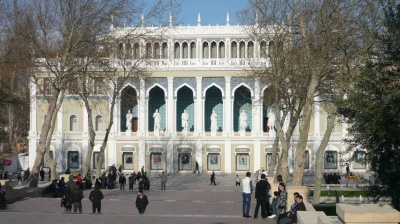 The Ninzami Theatre in Baku, the capital of Azerbaijan, which saw the CEE and Eurasia region’s largest increase in tourist spend between 2010 and 2017.
By Clare Nuttall in Bucharest October 19, 2018

Tourists are increasingly visiting far flung destinations in Eastern Europe and Eurasia that are not part of the usual tourist trail. Data from the WNWTO shows that in terms of spending by tourists, the largest increases between 2010 and 2017 were seen in Azerbaijan, Georgia and Tajikistan — all of which experienced an increase of 300% or over in the seven year period. 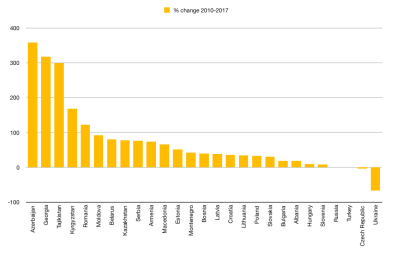 Increase in revenues from foreign tourists between 2010 and 2017. (Source: UNWTO)

Admittedly this was from a low base. Tajikistan benefits the leasts from the small number of tourists it manages to attract, drawing in just $8mn in 2017 — compared to $22.4bn in the region’s most popular destination Turkey. The numbers for Azerbaijan and Georgia are greater, but they still can’t compete with top beach destinations like Turkey and Croatia or the cultural lure of the Czech Republic, Poland or Russia. 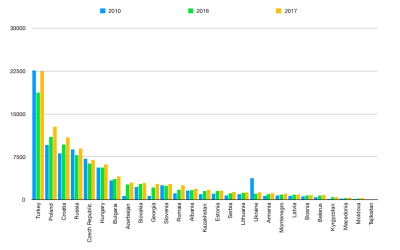 Turkey received the largest tourism revenues among countries in the CEE and Eurasia region, followed by Poland and Croatia. (Source: UNWTO)

Still the numbers tell a positive story about the growing attractiveness of more obscure destinations in this part of the world. Thanks to a combination of promotion efforts by governments, the expansion of budget flights (in particular to Georgia), and simply the growing propensity to travel worldwide and the increasing adventurousness of tourists, these and other previously overlooked destinations are seeing visitor numbers rise.

The number of visitors to Azerbaijan almost doubled from 1.3mn in 2010 to 2.4mn in 2017, and their spending more than quadrupled from $657mn to $3.0bn. Baku has had considerable success in raising the country’s profile with cultural and sporting events from Eurovision 2012 to the annual Grand Prix.

Visitors to neighbouring Georgia more than tripled between 2010 and 2017. As in Azerbaijan, there was an even sharper increase in tourism revenues, from $659mn to $2.8bn during the same period. Georgia’s rich history, spectacular mountain scenery, Black Sea coast, and wine and food are all draws for tourists to the country, which is increasingly served by budget airlines. 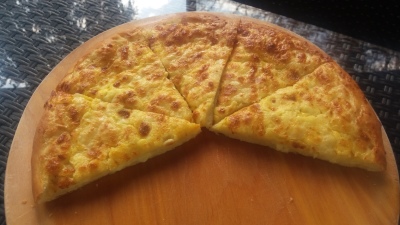 Khachapuri, a traditional Georgian dish of cheese-filled bread. The wine and cuisine are among the small Caucasian country’s attractions for tourists.

The three South Caucasus republics are particularly popular with Iranian travellers, especially around the Nowruz Persian (aka Navrus) new year holiday, when tens of thousands of Iranians travel abroad to celebrate in a more relaxed atmosphere.

Meanwhile, in Central Asia, Tajikistan has also experienced a dramatic rise in tourist revenues (the UNWTO doesn’t have data for the number of visitors to the country). Sadly, this could change after the brutal attack on a group of cyclists in July this year. The attack on the scenic Pamir highway claimed the lives of two Americans on a round-the-world bike trip, a Dutch psychologist and a Swiss man, and left three more people injured. Video footage shows the cyclists being ploughed into and attacked with knives and guns. IS claimed responsibility for the attack on July 30, though this has later been disputed by the Tajik authorities.

Apart from the terrible blow struck to the Tajik year of tourism, the perception of posed danger to westerners and other foreigners has the potential to impact on neighbouring Central Asian countries. Both Tajikistan and neighbouring Kyrgyzstan have since said they will set up dedicated tourist police forces. 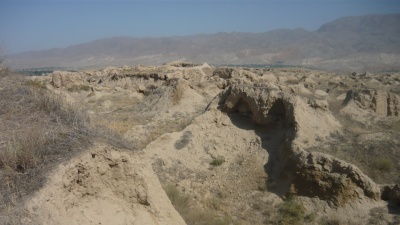 Kyrgyzstan was another country that experienced a substantial hike in visitor spend between 2010 and 2017, along with Romania, Moldova, Belarus, Kazakhstan, Serbia, Armenia, Macedonia and Estonia. All these countries saw the money spent by tourists increase by over 50%.

This comes in the contest of rapidly growing international growth. Globally, 2017 saw the highest growth in international tourist arrivals in seven years, as destinations that had suffered from security challenges in recent years recovered, the UNWTO report said. On top of that, “Growth was fuelled by the global economic upswing, resulting in strong outbound demand from virtually all source markets.”

Overall international tourist arrivals grew 7.0% in 2017, which was the highest increase since the 2009 global economic crisis, outstripping the UNWTO’s long-term forecast of 3.8% per year for the period 2010 to 2020. During the year, international tourism receipts increased by a real 4.9% (adjusted for exchange rate fluctuations and inflation) to reach $1.3 trillion.

“Destinations in Central and Eastern Europe … posted solid growth with a few exceptions, thanks to increased outbound demand from Russia,” said the report. In fact, with Russian tourists typically spending generously, “The recovery of the Russian outbound market … benefitted many destinations,” it added.

Worldwide, the fastest growth was in North Africa and Southern and Mediterranean Europe. Turkey was the eighth most visited country in 2017, up from 10th place the previous year, and the only country from the CEE and Eurasia region to make it into the top 10 most visited destinations worldwide. Visitor numbers were up 24.1% y/y in 2017, putting them back above the 2010 level, following a sharp fall the previous year after the failed coup attempt in 2016. A further hike is expected in 2018.

Revenues also dipped in 2016, and were only approaching the 2010 level last year, but this wasn’t enough to put Turkey among the top 10 countries worldwide in terms of revenues; a large share of the tourists who come to Turkey come for the budget beach breaks. The rapid devaluation of the lira this year means that even if numbers are up in 2018 revenues are unlikely to follow suit. 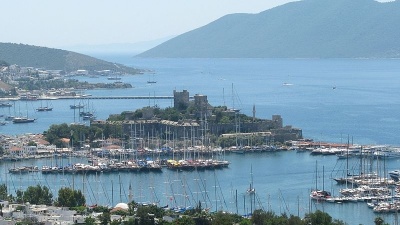 Tourists are returning to Bodrum, one of Turkey’s most popular tourist resorts. (Source: Robin & Bazylek)

Fellow eastern Mediterranean destination Croatia was the third greatest beneficiary from the CEE and Eurasia region in terms of revenues from tourism (after Turkey and Poland), and has seen steady growth in both visitor numbers and revenues between 2010 and 2017 — though recent data and anecdotal reports from the country indicate there is likely to be a slight dip this summer as tourists return to rival destinations like Turkey and Egypt.

The picture from the CEE and Eurasia region is generally a positive one, with revenues increasing almost across the board between 2010, with only a few exceptions. There were very slight declines in Turkey and the Czech Republic (though both saw an increase in tourist numbers), but Ukraine was the only country to see a substantial fall in tourism revenues.

The deep 67% decline in revenues between 2010 and 2017 is clearly a consequence of Russia’s illegal annexation of the Crimea in 2014 and the subsequent outbreak of war in eastern Ukraine. Not did this raise serious security concerns, Ukraine also lost its top seaside tourism destination, the Crimea.

Tourism in the Crimea is apparently thriving — the head of Crimea’s Moscow-controlled tourism administration told local newswires earlier this month that tourism in the peninsular has reached a post-Soviet high this year — but Ukraine no longer includes figures from Crimea in its data.

Data from the local statistics office reported by the Kyiv Post shows the number of tourists halved between the peak of almost 25mn in 2013 to just 12.5mn the previous year. Numbers continued to edge up in 2016 and 2017, indicating a tentative recovery, but are still well below the 2010 figure. Meanwhile, tourist spend slumped from the $3.7bn recorded in 2010 to under $1.1bn in 2016, but edged up slightly to $1.7bn in 2017. 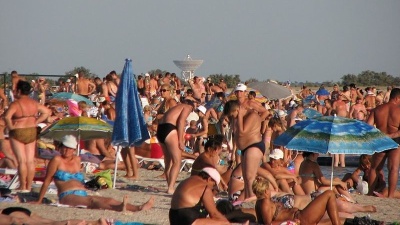 A crowded beach in Crimea, taken before the peninsular was annexed by Russia. Even more people arrived this year, as authorities say tourist numbers reached a post-Soviet high this year. (Source: Vladimir Gook)