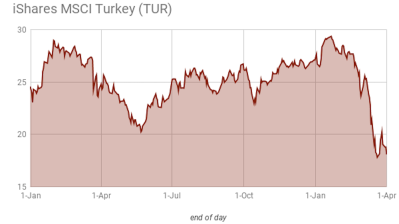 It's too early to buy stocks, Hugh Gimber of JPMorgan concluded on March 31.

There was no sustainable faith in the moderate rally seen in US equities. Investors took advantage of the slight comeback by resetting hedges in the options market, rather than adding to longs, Mandy Xu of Credit Suisse said on March 31.

The current rebound in markets may continue for a while following a bout of extreme pessimism, but another rout is imminent, Jim Rogers of Rogers Holdings told Bloomberg on April 1.

If the 2008 financial crisis is any guide, world markets—which have barely had time to recover from the dollar's 9% surge in mid-March—may be set for another damaging bout of strength in the greenback, Reuters reported on March 31.

On March 28, after the TUR closed the week on March 27 at 19.05, Inan Dogan said in an analysis for Insider Monkey that he expected the TUR to decline at least 10% by the end of April due to the spreading coronavirus (COVID-19) pandemic.

TUR, the only ETF that offers pure exposure to the Borsa Istanbul, replicates the MSCI Turkey IMI 25/50 Index, which covers around 99% of the free float-adjusted market capitalisation on the exchange.

Headlines in the Erdogan media questioning whether banks have any appetite to extend loans are becoming bolder.

There was no dash by customers to withdraw deposits while demand for consumer loans was down by 50% and credit card spending was also down 30%, according to Bastug.

On March 20, Moody’s Rating Services said that it cut Turkish Airlines’ (THYAO) rating to B2, five notches below investment grade, while it placed the Turkish flag carrier’s ratings on review for a further downgrade.

The airline was making moves to decrease operational expenses and increase its financial liquidity, it said on April 1 in a stock exchange filing.

Top refiner Tupras (TUPRS) has cut runs at its refineries as the oil market’s troubles amid a price war do not look resolvable soon.

On March 30, hard discount chain Sok Marketler (SOKM) said in a stock exchange filing that it launched free delivery services via a mobile application and it plans to hire 5,000 extra staff in 2020.