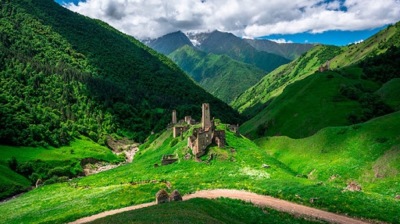 The region of Ingushetia is about to become the first Russian region ever to go bust
By Ben Aris in Berlin November 12, 2020

Russia’s southern region of Ingushetiya is about to become the first ever region in the country to go bankrupt, Novaya Gazeta reported on November 11, after its debt service obligations soared to 125% of its income thanks to spiralling costs incured by tackling the coronavirus (COVID-19) epidemic.

Russia’s regions are running out of money and the country is facing another regional debt crisis, as bne IntelliNews recently reported. While the federal government makes plenty of money from duties on the exports of raw materials and oil, the regions have to rely solely on personal income and corporate profit taxes for their revenues, as well as subsidies from the centre.

“Formally, there is a [procedure for declaring insolvency] which can be applied, in accordance with our Budget Code, if the region has overdue debt in the amount of more than 30% of its own tax and non-tax revenues. It is quite probable that such a state of affairs in the Republic of Ingushetia has come,” said Vladimir Klimov, director of the RANEPA Regional Policy Centre, as cited by the liberal paper Novaya Gazeta.

Ingushetia may be the first to fall, but “Spoiler: there will be plenty in the coming months,” Novaya Gazeta said in its report.

Ingushetia's public debt ballooned by around 64% in 2020 and now stands at almost 125% of planned annual budget revenue, Novaya Gazeta reports.

The terrible state of Ingushetiya’s finances is despite the fact that it was already the most subsidised regions in Russia, where federal funds account for 80% of its budget revenues. Unless something changes it will go bust very soon.

Not the first time

Russia’s regions had a near-miss debt crisis in around 2016 when they started to run big bills thanks to Russian President Vladimir Putin’s so-called May Decrees that dramatically lifted the cost of things like teachers and doctors' wages, while at the same time the Ministry of Finance sharply cut subsidies to the regions as it was itself struggling to fill a RUB2 trillion ($25.8bn) hole in the budget.

A similar thing is going on this year, as all of Russia’s regions have been hit by sharply inflated healthcare costs as they scramble to beef up public services in the face of the coronavirus epidemic, but at the same time are seeing revenues tumble as unemployment has doubled and the economy contracts sharply due to the lockdowns earlier this year.

The pandemic is expected to create RUB830bn ($10bn) hole in Russian regional budgets in 2020, according to Gazprombank. And to make things worse, despite the growing second wave of infections which is worse than the first, the Kremlin actually plans to decrease federal budget transfers six-fold next year, according to the new 2021-2023 budget plans.

As a result, almost all regions will start running deficit budgets and be forced to turn to the most expensive loans from Russia’s commercial banks in the New Year. Russia’s economy is supposed to return to growth next year after contracting by 4.1% this year according to the recently improved World Bank forecast, so the regions can grow their way out of debt, but that assumes life returns to normal next year.

"The federal government has transferred RUB2.13 trillion ($27.97bn) in the first eight months of the year to the regions, which is RUB697bn ($9.13bn) more than in the same period a year earlier. And there is another RUB100bn ($1.31bn) still to be transferred by the end of the year and RUB100bn next year,” Andras Toth-Czifra said in a recent paper published by the Institute of Modern Russia.

In addition, the Ministry of Finance just relaxed rules precluding the regions from taking more expensive commercial bank loans, but this borrowing is capped. Overall, the total commercial borrowing available to all Russian regions is an additional RUB74bn ($970mn) – a very small amount when set against the federal subsidies – but a little bit more than the estimate of the total regional deficits. The Ministry of Finance is not leaving much wiggle room in its calculations for screw ups.

And it appears the Kremlin is serious about making the regions stick to their budget forecasts, as the authorities may soon implement bankruptcy mechanisms in other regions that are already in trouble. Some of the worst off are Khakassia, Mordovia, Pskov, Oryol, Smolensk and Kurgan, according to Novaya Gazeta. Transfers from the federal budget will not be enough to fill all the gaps in these regions' budgets, according to Novaya Gazeta.

The situation in Khakassia and Mordovia is so bad that the Ministry has already taken both of these regions under manual control as well.

The problem is not the lack of money. The problem is the Kremlin is refusing to spending it. Over the last four years the government has built up a huge cash pile of almost $600bn in reserves, of which $172bn is in the National Welfare Fund (NWF), or about 9% of GDP.

Former Finance Minister and Audit Chamber head Alexei Kudrin recently criticised the Kremlin for not releasing more of this money to help the country weather the corona storm.

“The fund was set up to accumulate proceeds from high oil prices so that it could be used in difficult times,” Kudrin, who was finance minister until 2011 and now heads a government audit agency, told Bloomberg. “A pandemic is exactly that kind of situation.”

Putin brushed off Kudrin’s criticism again when asked about it during the annual VTB Bank investor conference on October 29, saying any increases in spending would be done “very carefully” in order not to run down the country’s foreign exchange reserves. Unlike other major economies, “we can’t just hold out our hand for more money,” he said.

The Kremlin claims it has earmarked an extra 9% of GDP to stimulate the economy this year, but economists say that much of that spending was already committed and has just been reassigned to things like the social sphere. The actual amount of new cash the Kremlin has earmarked for stimulus is closer to 3%, which is one of the lowest levels in the world. Other countries are spending in the double digits to keep their economies afloat.

The Kremlin is very reluctant to release more money to help bolster the economy, as Putin is keen to maintain a “fiscal fortress” of reserves that has been built up since 2016. The Kremlin has chosen austerity over prosperity as a result, as it sees these reserves as a strategic weapon in an economic war it is fighting with America.

Indeed, that war could be about to escalate. The new US President, Joe Biden, is widely seen as a hawk on Russia and the US government is already talking about imposing new sanctions on Nord Stream 2 gas pipeline, which only adds to the Kremlin’s reluctance to dig into its rainy day fund.