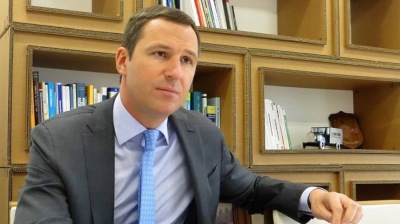 Denis Butsaev has been appointed head of the Russian Environmental Operator (REO). Formerly he was in charge of disposing of Moscow's trash
By bne IntelliNews February 19, 2019

In a sign of how seriously the Kremlin is taking the demonstrations against smelly landfills last year, the state has set up a national rubbish disposal company and Prime Minister Dmitry Medvedev appointed Denis Butsaev as its head, the Kremlin announced on February 19.

Butsaev will lead the Russian Environmental Operator (REO), Interfax reports. Prior to his appointment, Butsaev held the post of first deputy chairman of the Moscow government and was in charge, among other things, of setting up waste incineration plants for the capital.

A new state-owned company was created by order of President Vladimir Putin in mid-January. Russia’s mega-cities – Moscow and St Petersburg are by far the largest cities in Europe – have a problem disposing of their rubbish and overfull land fills have also become an issue in many of the so-called milliononki, or regional cities with more than one million inhabitants.

The goal of the REO is to stimulate the processing and reduction of waste disposal, and by 2020 to create a unified system for the accounting of household waste.

The REO is also supposed to develop an all-Russian territorial waste management scheme, and find out how much waste is produced in each territory of the country, and how many complexes are needed for waste management, processing, a regional official explained to Vedomosti.

The reform is harder than first appears as there are already budgetary funds attached to the disposal of waste and like in other countries these funds have been captured by corrupt officials who resist reforms and tend to dispose of waste in the cheapest way possible to maximise profits. The appointment of high profile figures by the Kremlin to manage waste is a de facto crackdown on corruption, necessary to make the reforms work.

The new company has a budget of RUB75bn ($1.1bn). Experts say that it will prepare the mechanisms for attracting investment in the industry. The exact functions should be formulated in the statute that is being developed. The operator will also buy land and other property for the construction of waste recycling and incineration enterprises, the agency said.

During his time in City Hall Butsaev oversaw a project for the construction of incinerators in the Moscow region. But the main skill is in attracting investments, an official from the Moscow region government said to Vedomosti. According to him, with the arrival of Butsaev, investments in the region increased by 11.4%. Three special economic zones were created, and about 2,000 investment projects are in operation.