The advertising market in Russia and Ukraine continues to boom

Advertising spend in Ukraine is booming
By weCAN advertising agency May 4, 2018

The ranking of media types based on the distribution of advertising spending has not changed compared to past years. Television is still the strongest medium in both countries absorbing over 40% of advertising budgets, followed by digital, OOH, press and radio. 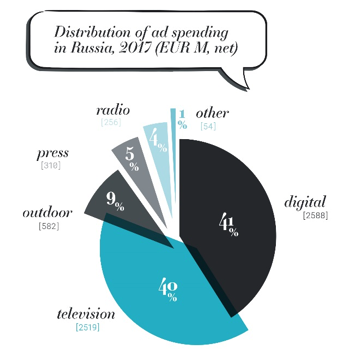 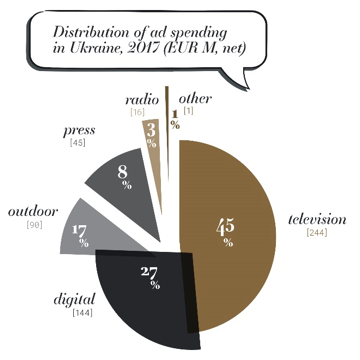 weCAN’s calculation based on the Association of Russian Communications Agencies (AKAR) and the All-Ukrainian Advertising Coalition (VRK) the dynamics of the Russian advertising market follow Western trends: all media types are shrinking slowly or stagnating, except for digital. However, contrary to what was expected in 2017, the volume of online advertising spending has not exceeded the spending in television yet. This milestone will probably be reached this year.

“Digital remains the fastest growing segment and its budget volumes have come close to ad spending in television. Internet share of spending continues to grow and in 2018 we expect it to overtake TV, following global trends. It has already happened in Q3 2017 – for the first time, Internet SOS exceeded television ad spending. This year, it will be very interesting to watch the tough competition between TV and digital for first place in the media mix,” said Leyla Davydova, research director at IPG Mediabrands Russia/ADV Group. 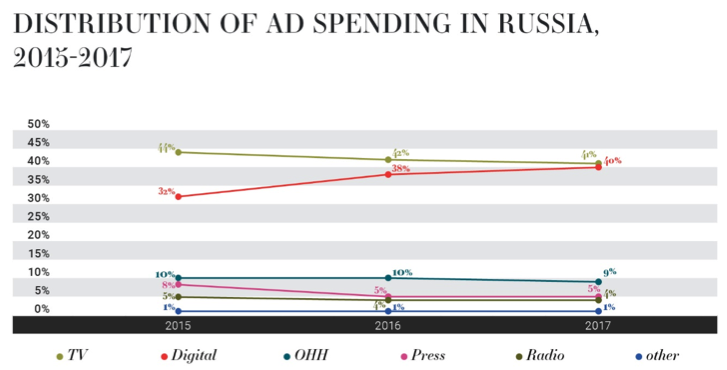 weCAN’s calculation based on AKAR

Even though the Ukrainian digital ad market is one of the most developed in Central and Eastern Europe, according to the weCAN annual Report 2017, online is still far from taking over TV. However, in one media type Ukraine will certainly take the lead in the region. Following some technical adjustments of the measurement methodology of outdoor advertising, the total volume of the billboard (OOH) market increased from 11% to 17%, becoming the highest share of outdoor advertising within the total ad spending in Central and Eastern Europe. 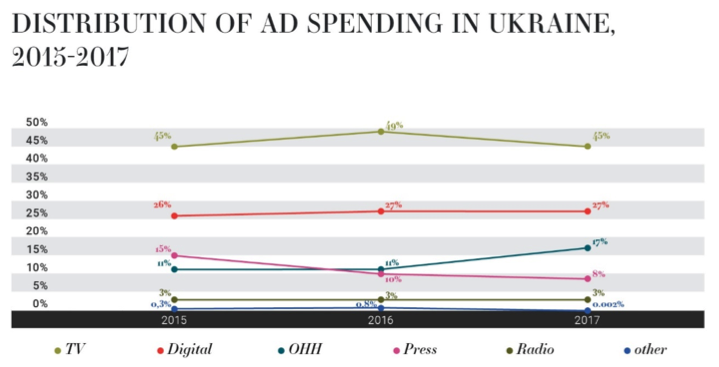 weCAN’s calculation based on VRK

“Television and digital are the key media channels. Young people under the age of 34 spend as much time on the Internet as watching TV. Mobile internet penetration and usage is increasing thanks to growing 3G/4G coverage and mobile tariffs. The main trend in the television segment was that many brands have returned to screen. Consequently, all advertising time was sold out between August and December and TV sponsorship investments grew significantly. As for the outdoor market, the number of constructions decreased, especially in Kyiv, while media inflation hit record levels,” said Anna Kireieva, senior media planner of weCAN’s Ukrainian media agency partner, Initiative Ukraine / ADV Group.

Tourism’s long road to recovery
7 hours ago
DATACRUNCH: the bne car ownership/age index
1 day ago
Money laundering pushes up property prices in Western Balkan cities
2 days ago
LONG READ: The first thing the emerging middle classes of New Europe do is buy a better car
2 days ago
Russia’s oil and gas reserves will last for another 59 and 103 years respectively, says natural resources minister
3 days ago