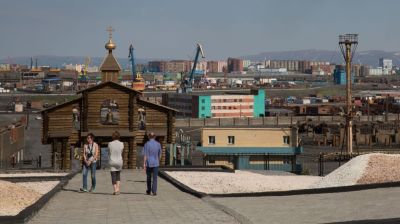 View past a Gulag memorial over the Arctic city of Norilsk.
By Vladimir Kozlov in Archangelsk April 6, 2017

Collaboration between the government and business and the use of contemporary technology were seens major factors for development of Russia's huge Arctic regions, according to participants in the international Arctic forum “Arctic: Territory of Dialog”, which took place in Arkhangelsk on March 29-30.

“Russia is unique among Arctic countries as it has 2.5mn residents in its Arctic regions who are there not to just make money and leave, but want a future in those regions,” said Deputy Economic Development Minister Alexander Tsibulsky.

Russia’s Arctic territories account for about 40% of all global Arctic territories, and attempts to develop them have been made since the late 19th century. The most intensive development of the regions came in the 1970s and 1980s when the Soviet Union’s planned economy allowed the government to spend huge financial resources in the Arctic without expecting any short-term economic returns.

In the 1990s, the government had neither cash nor desire to deal with the regions’ challenges, leaving the task of developing the Arctic with private companies operating there.

However, in recent years, the Russian government has been serious about the region’s development, seeking to establish relations with companies interested in investment.

It came up with the idea of eight “support zones”, including Arkhangelsk, Taimyr, Yamal and Chukotka, that are expected to become drivers for development of the region’s other territories.

“The idea is to create transparent investment conditions, some kind of agreement between the government and business,” Tsibulsky said. “Business should take responsibility for investment and job creation, while the government will focus on infrastructure issues.”

Bringing companies together on infrastructure

According to the deputy minister, one of the government’s major tasks should be the coordination of efforts by companies willing to build their own infrastructure in the Arctic region.

“Major companies that come to the region often build their own infrastructure, but if two airports are built just 100km apart from one another, that’s unreasonable,” he explained. “Coordination of such efforts would substantially reduce investors’ costs.”

According to Yelena Bezdenezhnykh, vice president at Norilsk Nickel, the company has had positive experience with the federal and local government on a number of issues, including preferences for projects in the Arctic and decomissioning environmentally unsafe assets.

“Over the last few years, more has been done in that respect than over the 50 or 60 previous years of our company's operation,” Bezdenezhnykh said.

However, it’s not all rosy when it comes to relations between the government and small and midsize business, whose interests are often ignored.

In addition to collaboration between the government and business, application of contemporary technology is vital for exploration and development of the Arctic region.

“We are currently working on a satellite system aimed to facilitate development of the Arctic region and international transportation,” said Anatoly Perminov, deputy general director of Russian Space Systems. “The first two satellites is to be launched in 2018.”

According to Perminov, the use of drones for Arctic exploration is another promising direction as the total market of drones in Russia approached $320mn.

“Technology that used to be applied only in the nuclear industry is being introduced in the Arctic,” said Vyacheslav Pershukov, deputy general director at state nuclear corporation Rosatom.

He mentioned projects with natural gas producer Novatek and United Shipbuilding Corporation that are already in progress, as well as totally new solutions, such as the use of laser systems for cleaning snow after oil spills.

Meanwhile, cutting-edge technologies need to be applied to areas making the lives of the region’s residents better, not just businesses.

“Where there are people, there are finances and financial technologies,” said Yevgeny Dankevich, chairman of the board of Otkritie Bank.

“Our aim is simple,” he added. “If people live in an area, their life should be made as  comfortable as possible.”

He drew an example of the lender’s “digital mortgage” programme, which allows people looking to buy property outside the region to look at various apartments without leaving their home or office thanks to the virtual reality technology.

“We need to rework the model of human presence in the Arctic,” Dankevich concluded. “The model that arrived 50 years ago is no longer valid.”